Court-side Reaction: what I saw live at the first preseason game 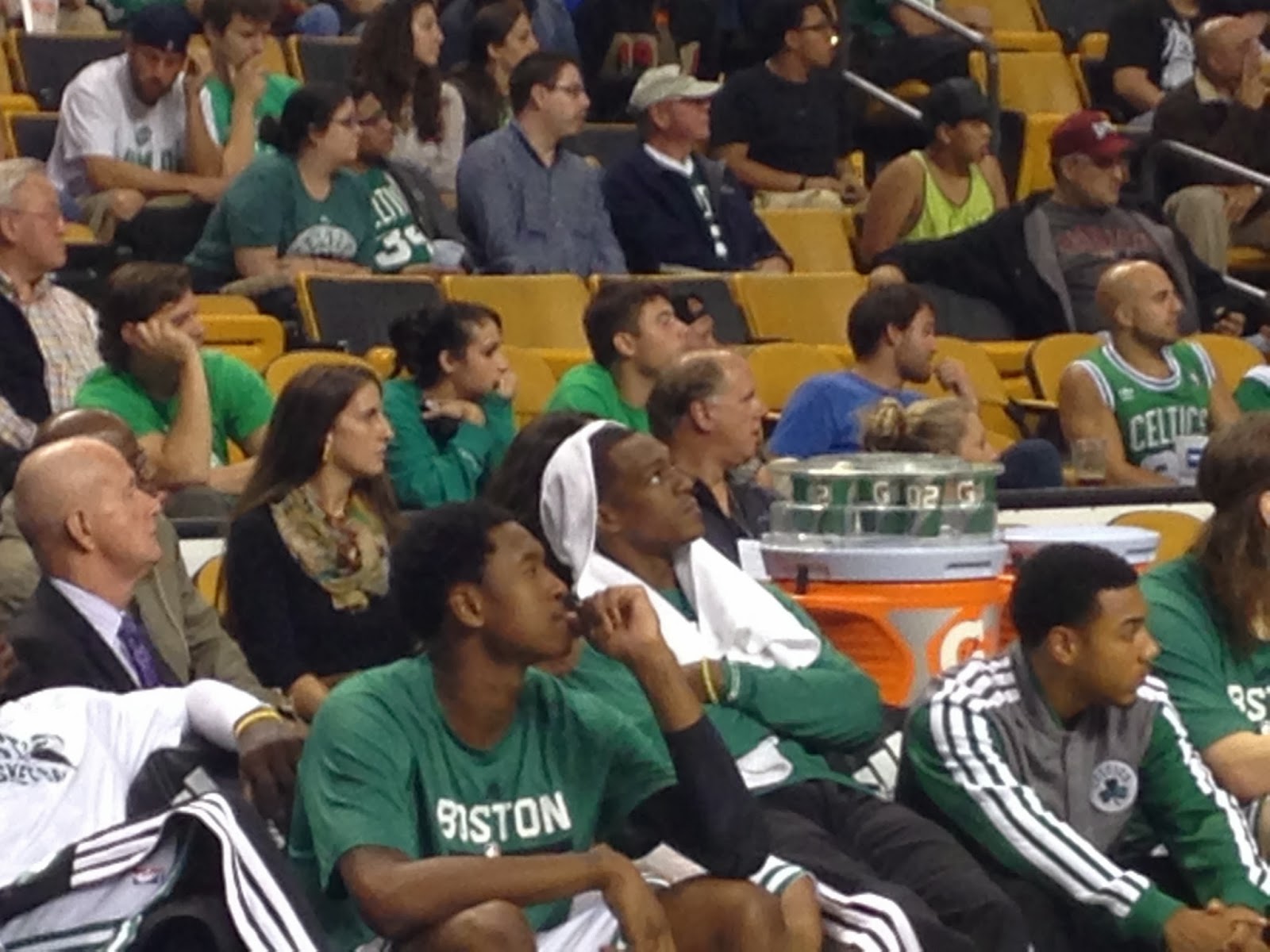 Being in the building for a game always feels like a completely different experience to me than watching a game on television. I am returning home from sitting court side, about 20 feet from the Boston Celtic's bench. I have not taken a peak at the box score, but here are some of my take aways from the first preseason game. No numbers, just pure observations (plus some mixed in photos that I snapped).

Rajon Rondo warmed up/sat on the bench
We know Rondo has been working out with the team, but it was nice to see him out there in a leadership role. Shortly after the team began layup lines, Rondo game out of the locker room and rebounded for his teammates for the end of warm ups. Rondo remained on the bench the entire game, constantly communicating with the coaches and his teammates.

Brad Stevens
Stevens was calm as usual. He had many conversations with his point guards through out the game. He seemed comfortable calling a lot of plays and even positioning the young players on the floor when they were not sure where to be. It is still a learning experience for Stevens. He did not wow me during the game, but certainly showed he has the mind for the job.

Jeff Green was not assertive... at all
This is exactly what we did not want to see from Green. Yes it is the first preseason game, but Gerald Wallace was significantly more aggressive and more involved in the offense. Green passed up on some jump shots he needs to take, and avoided going hard to the rim.

The point guard position
Avery Bradley appeared to be more himself tonight. I think it was because he was not trying to be the real point guard, he knows Rondo will return to that role. Bradley more just tried to manage the game, and did a decent job of it. Unlike other times he has played the point, he shot well and was his usual menacing self on defense.

Jordan Crawford got the backup duties. I've got to say, no matter what the numbers may indicate I don't like this. Crawford didn't make any mistakes, I just don't know what he gives the team in that role. MarShon Brooks played about four minutes in the first half, I would have liked to see him get more of a shot. Phil Pressey did not touch the floor which was disappointing. Hopefully they will see some chances in upcoming games.

Coach Brad Stevens called Bradley over to the sidelines several times to go over offensive sets. Stevens also kept yelling to Jordan Crawford to speed the pace up when he was in the game. Crawford never seemed to get the message as far as I could tell.

The young bigs
Jared Sullinger looked out of shape at a glance. He also looked fantastic when he got to playing. Sully was a pounding force in the paint, scoring in a variety of ways, moving the ball and crashing the glass. Maybe even more impressively Sullinger was able to step in and take charges, going to the floor hard after his back surgery. It was pretty encouraging seeing what he could do tonight. Kelly Olynyk really impressed me with his passing. Once his defense comes around he and Sully will complement each other well.

Who were the leaders?
Sullinger was probably the Celtics best player, but I thought Avery Bradley took a quiet leadership role on the offensive end in the game. Like I said earlier, something about the way he "managed the game", it was not spectacular, but it seems as though he has matured some.

On the defensive end Bradley is clearly a leader by example, but Kris Humphries was one of the vocal leaders on defense. Hump was calling out switches and covering his teammates backs when they got beat. I was hopping for more of that from Brandon Bass than I saw.

What was really interesting though is that Rondo took a pretty big leadership role himself, even from the bench. Rondo was constantly signaling to his teammates on the court, as well as talking things over with them during their time on the bench. Rondo was almost like a member of the coaching staff during the game. I have to say, I was very impressed with Rondo tonight. It sounds silly to say about an injured player, but he was a true leader for the Boston Celtics in preseason game one.