Could an Amar'e Stoudemire to Boston trade help both the Knicks and Celtics? 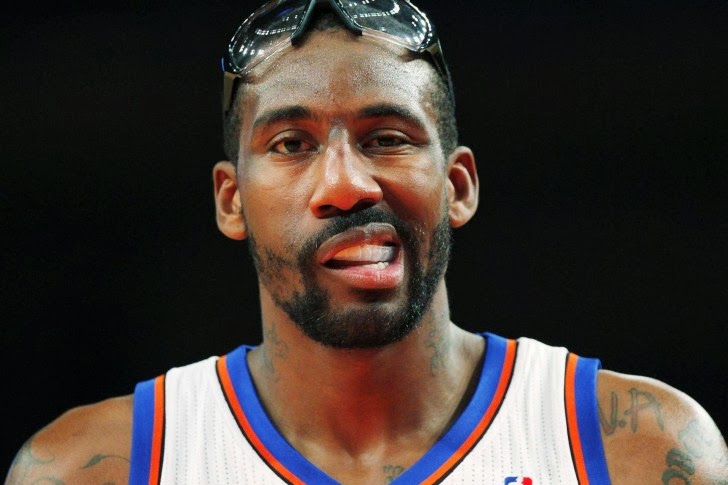 For those who think that this current Celtics core is good enough to contend for a playoff spot — a disclaimer — this article is probably not for you (Semi-related: Mark's well written article on why winning is still a good thing).

But for those who think that the next year is about positioning this team for the future – i.e. developing young talent, acquiring assets and putting this team in position to get a ton of ping pong balls in next years draft lottery – this is one creative idea that could help the Celtics stock up for the future even more.

When the Celtics traded Paul Pierce, Kevin Garnett and Jason Terry to the Nets for Kris Humphries, Gerald Wallace, MarShon Brooks, Keith Bogans and three first round picks, Danny Ainge was able to take advantage of a desperate Nets team and got them to overpay for Pierce/KG/Terry because Brooklyn wanted to compete for a title so badly.

Brooklyn sold their future to improve their chances in the short term.

And now, Ainge needs to take advantage of a team who needs to do the same thing. A team that plays in the same city as the Nets.

The Knicks are a good team, but had a terrible off-season. They signed J.R. Smith to an extension, only to have him immediately have surgery and then get suspended. They also dealt for Andrea Bargnani, showing their desperation to try and build a contender. They've also backed themselves into a corner financially, with $92 million in commitments for this season, and $70 million for 2014-15 (which doesn't include the max money Carmelo Anthony will get next summer).

With Carmelo approaching free agency, it's vital that the Knicks have a good season and put themselves in position to re-sign Anthony when the Lakers come calling next summer. The only problem is, New York is being weighed down by the anchor that is Amar'e Stoudemire's contract. The oft-injured big man is making $21.7 million this season, and $23.4 million in 2014-15, a contract that will cost the Knicks closer to $40 million because of the luxury tax. Because of his injuries, Stoudemire has declined significantly as both a defender and rebounder, and the Amar'e - Bargnani combo may cause Tyson Chandler to commit a homicide with all of the missed defensive assignments.

The Knicks would likely pay through the nose, much like the Nets did, in order to rid themselves of Amar'e before next summer.

The Cs could put together the following offer to New York.

Note: original article had them dealing 2015/2017 picks, but Knicks already dealt their 2014 pick to the Nuggets for Carmelo, and their 2016 1st to Toronto for Bargnani. Per CBA rules, they can't trade consecutive 1st rounders, making this deal harder to do. Unless the Celts are looking for firsts way into the future. Thanks to Jeff for the catch.

Clearly a loss for the Celtics on paper, and an expensive price for the Knicks to pay to rid themselves of Amar'e..but here is why I think both teams do it.


Why the Knicks do it:

Bogans will immediately be stapled to the bench, but in Humphries and Bass the Knicks get two versatile bigs who are both better overall players than Amar'e. Humphries gives the Knicks a legit rebounder and energy guy to start alongside Chandler, while Bass could give NYK a spark off the bench and help defend opposing wings. Humphries would also allow Bargnani to slide to the bench where his defensive deficiencies would be easier to hide. Considering Stoudemire is no lock to be healthy, there is little question that New York makes out in a big way in 2013-14.

With Carmelo approaching free agency, the monetary savings is a huge factor why New York does this deal. They only increase salary a little this season (which helps the Celtics - more on this later), but gain a lot of space back in 2014-15. They trade in Amar'e's $23.4 million salary for Bass' $6.8, freeing up nearly $17 million.

Why the Celtics do it:

In the new NBA landscape, firsts are more valuable than ever. This deal gives Boston an amazing 12 firsts between 2014-2020. For those who say, "do we really need THAT many firsts?" - that's a fair question. But it's not just about the players the Celtics could draft, it's about the value that those picks have to other teams.

Last year, Josh Smith could have been had for expiring deals and two first round picks. No team bit.

Three years ago, Deron Williams was basically traded for three first round picks (Derrick Favors had just been drafted, plus two future firsts).

In the future, stars who are approaching free agency will again be dangled for picks. With a monster haul of picks, the Celts will be in great position to pounce. The only possible ways to get a star to Boston is to draft them or to trade for them..and this deal helps improve the chances of them doing both.


2. It makes them worse in 2013-14 - I wrote a few days ago that the best thing the Celtics can do is to deal their role player types in an effort to avoid potential playoff contention. This deal certainly helps with that.

Just as the Knicks get better, Boston surely gets worse. Amar'e doesn't come close to replacing the production of Hump and Bass, and the Celtics will slide in the standings. With so much on the line in the 2014 draft, this deal puts the Cs in better position to get a franchise altering star next summer. Obviously this is a major turn off for fans who want to see how this group of players does on the court, but for the long term prognosis of the franchise, this deal helps.


3. It doesn't hurt them financially long term - There are three different financial aspects of this deal to look at.

#1. The Celtics shed nearly $2 million in salary for this year. This is helpful because the Cs are ~$500,000 under the luxury tax with only 14 players under contract. This deal gives them more breathing room, important as Boston will do whatever it takes to stay under the tax and avoid the repeater penalties.

#2. Boston does take a hit in 2014-15, adding nearly $17 million in salary. Only, this doesn't matter that much. The Celtics are unlikely to add any major free agent additions this summer anyways, and even with Amar'e in house Boston will only be at ~$65 million in salary for 2014-15. Sure, the team needs to sign Avery Bradley and next year's first round picks..but the Celtics can stand to take a one year hit financially. There is also the chance that Boston could dump Amar'e's expiring contract next year, although that's far from a guarantee. This is clearly the major negative about this deal, but unless you think the Celtics will be players in the free agent market..it doesn't cause any long term damage.

#3. The big summer for the Cs is 2015, when Rajon Rondo will hit free agency. This deal doesn't cause any damage in this department as Amar'e's deal expires after the 2014-15 season.

By subbing out two players (Bass/Humphries) for one (Amar'e - who may not be able to play anyways), the door opens for Jared Sullinger, Kelly Olynyk and Vitor Faverani to get more playing time. Considering this is a development year, it's important that the Cs see what they have in their trio of young bigs. This trade could help move that process along by getting rid of the two veterans currently on the roster.

Sure, it's never fun to make a trade you know going in makes your team worse..but this is the reality of rebuilding. You either sit idly by and hope for the best..or you get proactive and try to make moves. If you're going to be bad, be really bad in the short term so that you have a better chance at enjoying the fruits of that poor season later. That's what this deal (and other deals of the like) offers the Celtics.