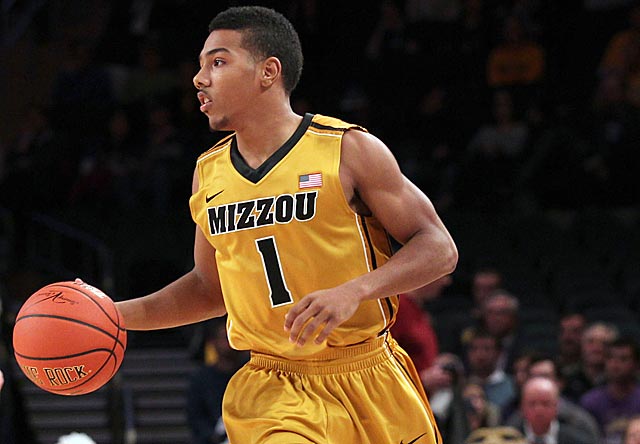 Day two of the "Camp questions" series brings us to our first player under guaranteed contract for the 2013-14 season — point guard Phil Pressey.

Pressey is a 22-year-old point guard who attended Missouri University. Last season at Mizzou the 5'11" Pressey averaged 11.9 PPG, 7.1 APG, 3.3 RPG and 1.8 SPG for the Tigers. Following the season Pressey decided to forego his senior season and enter the NBA draft, but went undrafted. After the draft, Danny Ainge gave Pressey's agent a call and offered him a spot on the summer league team.

1. Is he the opening night starter?

An undrafted free agent as the opening night point guard? As crazy as it seems, it just may happen. It seems more and more likely with each passing day that Rajon Rondo will not be ready for opening night as he continues to recover from ACL surgery. If that's the case, the Celtics have a few options at PG.

They can go with Courtney Lee, who surely brings more of a scorers touch to the table. But Lee is also a natural SG, meaning that either he or Avery Bradley will be playing out of position. They could also go with (gulp) Jordan Crawford. Crawford's passing skills have been lauded, this despite the fact that he rarely shows them off. Instead consistently forcing horrific shots and torpedoing possessions with his decision making. Or, they can go with the rookie. After all, Pressey has been a point guard all his life and has the best shot of anyone to be able to fill in for Rondo and run the offense effectively. What the Celtics really need in Rondo's absence is a guy to get the other guys the ball in the right spots, which Pressey should be able to handle.

Follow Rondo's return the follow up to this question is: Can Pressey stay in the rotation? In years past back-up point guard has been a non-existant position on the Cs roster. But if Pressey impresses early on, he should be able to carve out a role as Rondo's understudy.

2. Is he as bad of a shooter as the numbers say?

Pressey is an old school point guard, excelling at setting up his teammates rather than scoring himself. In some ways, that makes him valuable on a Celtics team with precisely one other point guard on the roster. But at some point for every player, there comes a time where they are left open and must knock down open jumpers. And that is a major issue for Pressey.

Last season at Missouri Pressey shot a horrific 37.6% from the field and 32.4% from the collegiate three-point line. Those numbers aren't merely bad, they're horrific. And it doesn't figure to get better as the 5'11" Pressey will now face bigger, faster defenders and the three-point line backs up even further. So the question is, is Pressey really an awful shooter? Or merely bad?

Well to his credit he wasn't that bad during his Sophomore season, shooting 42.8% from the field and 36.5% from deep. Not that those numbers are great, but they are at least serviceable. However as a Freshman Pressey's numbers mirrored what we saw last year (38.7% FG, 36.1% 3 PT FG). Clearly a major cause for concern as he begins his NBA career.

Digging deeper, Pressey seems to have major issues while shooting on the move, especially converting at the rim. With more on that, here is part of his draft express scouting report.

When he looks to score, Pressey is limited by his size and less than stellar pull-up jump shooting. Though he's a fairly capable shooter from beyond the arc with his feet set, he made just 34% of his pull-up jump shots, 37% of his runners, and 39% of his shots at the rim last season according to Synergy Sports Technology. Considering nearly 80% of his possessions came as a ball-handler in transition, isolation, or pick and roll situations, his inconsistency scoring off the bounce will be put under the microscope in individual workouts.


39% shooting at the rim in college is just not going to get it done. Not by a long shot. Here's to hoping that a full camp with NBA quality coaching can help Pressey become a lot more efficient as a shooter.

3. Can he stop turning the ball over so much?

Pressey was an alite assist man at Missouri, racking up 7.1 APG last season, and ranking as the 3rd best assist man (per-40 minutes) in the 2013 draft (via draft express). However, with those assists came turnovers. A lot of them.

Pressey averaged 3.5 turnovers in 33.9 minutes per game last season, which also made him the most turnover prone player (again, per-40 minutes) in the 2013 draft.

So now the question becomes, can Pressey protect the ball better while still making plays for his teammates? If the summer league is any indication — the answer is no. Pressey actually turned the ball over at a much higher rate in the summer league than he did at Missouri, committing 4.0 TPG over just 23 MPG.

Of course, small sample size certainly comes into play over the course of a mere five games. But 20 turnovers in 115 minutes is not the best way to start out your NBA career.


Pressey is the only healthy PG on the Celtics roster, which clearly gives him an advantage in terms of earning playing time. However, if he doesn't become more efficient — both in terms of scoring and protecting the ball — that won't matter. The Celtics can't turn to a rookie who can't shoot and turns the ball over a ton as their starter (or even top back-up).

Definitely some major questions for Pressey as camp approaches.

For the rest of the "Camp questions" series click here