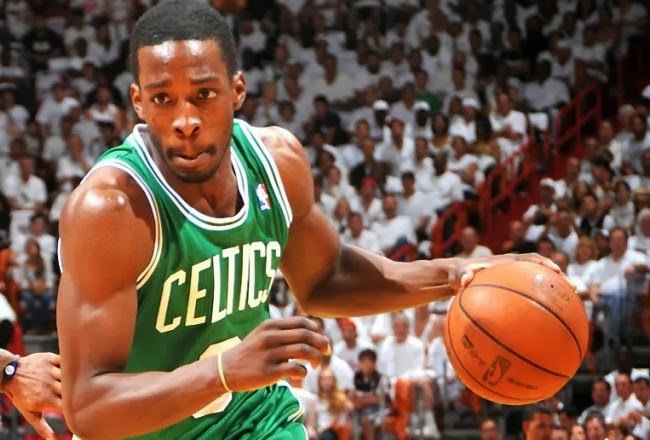 Remember the ill fated 2007 draft lottery? You know..this one?

When the Celtics had the 2nd best chance to land either Greg Oden or Kevin Durant, but instead fell to 5th (the lowest possible outcome), and it seemed as though hope was lost for the next decade? Well, it turns out it wasn't. Because the Celtics were able to trade the 5th pick, which ended up being Jeff Green, to Seattle in a package for Ray Allen. A trade which opened the door for the Kevin Garnett deal and all of the awesomeness that followed.

For Green, it was the beginning of a roller coaster career. He spent just one season in Seattle before moving with the team to Oklahoma City. It appeared that he was ready to breakout during his 2nd NBA season, as he averaged 16.5 PPG and 6.7 RPG (both career highs) at the age of 22. But he never took the next step, averaging just over 15 PPG in both 2009-10 and 2010-11 with the Thunder. It was clear that Russell Westbrook was Robin to Durant's batman, and that Green was more of an Alfred (although Alfred is way cooler than Robin..so maybe this analogy just sucks).

With Westbrook becoming a star and James Harden emerging as a legitimate threat, the Thunder dealt Green to the Celtics for Kendrick Perkins and Nate Robinson in February of 2011. Green struggled to hit his stride throughout the tail end of the 2011 season, averaging only 9.8 PPG for a Celtics team that got knocked out of the playoffs in round 2.

Before the 2011-12 season got started, Green's roller coaster career again dipped, this time when a heart condition was discovered during a training camp physical. He would miss the entire 2011-12 campaign.

Danny Ainge nearly caused the internet to explode when he signed Green to a 4 year, $35.2 million deal in the Summer of 2012. This despite the fact that Green was a clear back-up to Paul Pierce and that he was coming off of major surgery.

And during the first half of last season, those who criticized Ainge for committing big money to Green looked pretty smart. Green just could not seem to get comfortable. He showed flashes but was incredibly inconsistent, and was averaging only 9.4 PPG through the teams first 42 games.

And then something crazy happened. Following Rondo's ACL tear on January 25th, Green became a new man. His playing time shot from 23 MPG up to 33 MPG, and with that he began to produce. Over the second half of last season Green averaged 16.5 PPG and 4.7 RPG, shooting 50% from the field and 43% from three, and helped fill the offensive void left by Rondo. He then averaged 20.3 PPG in the Celtics six playoff games against New York, putting an exclamation point on a resurgent 2nd half.

Green will make $8.97 million this season. He has 3 years, $27 million remaining on the four year he signed last summer.

1. Is Green the heir to Paul Pierce's throne?

There may be no player in the NBA with more on the line this season than Green. He's 27 years old, healthy, and now entering his 3rd season in Boston (not counting the season he missed). In other words, there are no excuses.

He's now the 2nd best player on the Celtics, and without question the go to scorer for a team that just lost the 2nd greatest scorer in team history in Paul Pierce. Now Green takes Pierce's place in the starting line-up, adding to the pressure already on him to perform.

Of course, Green should not be focused on "replacing Pierce", but instead just being the best possible player he can be. With that said, Green is taking over Pierce's role as lead scorer and starting SF, and it's time to see if the improvements we saw during the final 40 games last season was just a mirage, or whether it was the beginning of him taking the next step as a player.

While Green will never be the all around player Pierce was (Pierce averaging a career high 4.8 assists per game last season is a testament to that), it's actually fairly realistic to expect Green to be able to fill the scoring void left by Pierce.

While Pierce was still a very good player last year, it's no secret that he slipped a bit in the efficiency department. His 43.6% shooting percentage was his lowest since 2003-04, and according to Synergy Sports he averaged only 0.93 points per play (ppp), his lowest number since Synergy started keeping track in 2009.

Green on the other hand shot 46.7% last season while averaging 0.98 ppp. Green will now face more double teams with Pierce in Brooklyn, but he has the type of skill-set — explosive driving ability and the ability to shoot threes — that does lend itself to success even when he's facing more defensive pressure.

So while Green will never replace Pierce in the hearts of Celtics fans, it's a fair question to ask him to replace the level of production we saw from Pierce last season.

2. Can Green learn to play with Rondo?

To illustrate that point let's take a look at Green's stats with Rondo on the floor, and without him:

Clearly there was a lack of chemistry between the duo, and whatever it was that caused them to be on different pages will need to change quickly once Rondo is back from injury.

One possible explanation for Green's struggles with Rondo on the court is that Green needs the ball in his hands to be successful. According to Synergy, 49% of Green's attempts last season came in "ball dominant" scoring positions (i.e. isolation, transition, post). When Rondo is on the floor Green is less likely to get these types of play calls as Rondo dominates the ball, so a drop in production isn't all that surprising. With that said, they will need to figure out a way to play off each others skill-sets better as the Celtics enter this new era of basketball.

3. Is the defensive improvement real?

Green is a physical specimen. He's 6'9", 235 pounds, runs like a gazelle, and has all of the characteristics necessary to be a good defender. But early in his career, that wasn't the case. But lately we've seen some progress out of Green on that side of the ball. Check out the stats, again via Synergy.

The question is, has Green's ability as a defender finally matched his athletic ability? Going by the data, it appears that's the case. But with KG no longer around to erase mistakes as the last line defense for the Celtics, this will be a big year for all of the Celtics on the defensive end of the court.

For more of the "camp questions" series, click here