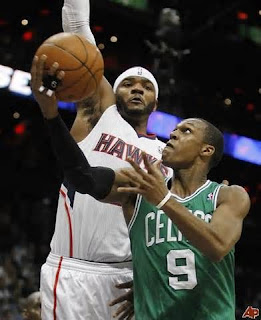 Josh Smith has reportedly agreed to a 4-year $56 million contract with the Detroit Pistons and some in NBA circles are speculating that Rajon Rondo could join his schoolyard chum in the Motor City.

It's been well documented that Rondo and Smith are good friends and want to play together and a core of Rondo, Smith and Monroe or Drummond would be pretty nice going forward. The paint would be a tad clogged, but it's not like there is a ton of open space already with Monroe, Smith and Drummond.

Even though Danny Ainge has said repeatedly that he is not looking to trade Rondo, I'm not sure he can say no if Detroit offers a package like Brandon Knight, either Andre Drummond or Greg Monroe and a couple draft picks. Even with the Smith signing, Detroit is under the salary cap by about $10 million so making the money equal out isn't really an issue. Of course if Detroit wanted Boston to take on the expiring deals of Rodney Stuckey or Charlie Villanueva (around $8 million each) it doesn't seem like Ainge would say no. He's shown a willingness to take on bad deals, like Gerald Wallace's $30 million, as long as there are assets to build on included in the transaction.

Even if the deal were Drummond or Monroe, a pick or two and one of the expiring deals, the Celtics should still strongly consider it. Everyone is talking about what Rondo's relationship with new coach Brad Stevens is going to be like as Rondo isn't exactly Mr. Sunshine in the locker room. Why worry? Eliminate Rondo from the equation as his prime will be wasted on a rebuild anyway and while reports are he's open to Stevens, there is no way he's okay with Paul Pierce and Kevin Garnett getting shipped to Brooklyn.

Either one of Detroit's bigs is a legit player with lots of potential and they are both young enough to benefit from Steven's teachings. The expiring deal would give Boston a ton of cap space to build on later and team built around Avery Bradley, Jeff Green, Jared Sullinger, MarShon Brooks, Wallace and Monroe/Drummond would still be entertaining.

Yes, Rondo is a great player and one of the best point guards in the league. But he's hurt and no one knows when he'll be back and how he'll play once he does hit the court. They say he'll be there opening night, but we all saw how predicting the return of a player from a busted ACL goes with Derrick Rose. Grabbing more assets to rebuild with for a point guard coming off an ACL tear would be the prudent move.

Injuries aside, we all saw how this team looked when it was "Rondo's Team" before he went down with the bum knee last season. They were under .500 and that was with Garnett and Pierce. Hard to imagine the team doing a ton better without their two future hall of famers.

For Rondo's sake, he should be competing for rings now, but the way this team is constructed, he's going to be waiting a while. Might as well send him somewhere where he at least has a chance instead of sticking around on a team collecting draft picks in 2018.

Here are some of the tweets talking about the possible pairing of Rondo and Smith. At this point, it is pure speculation:

Remember, Rajon Rondo and Josh Smith are good friends with interest in playing together. If he wasn't open to Detroit before, he may be now.

Pistons will try and trade for Rajon Rondo to pair with good friend Josh Smith.