An ode to Paul Pierce, the greatest Celtic of my lifetime 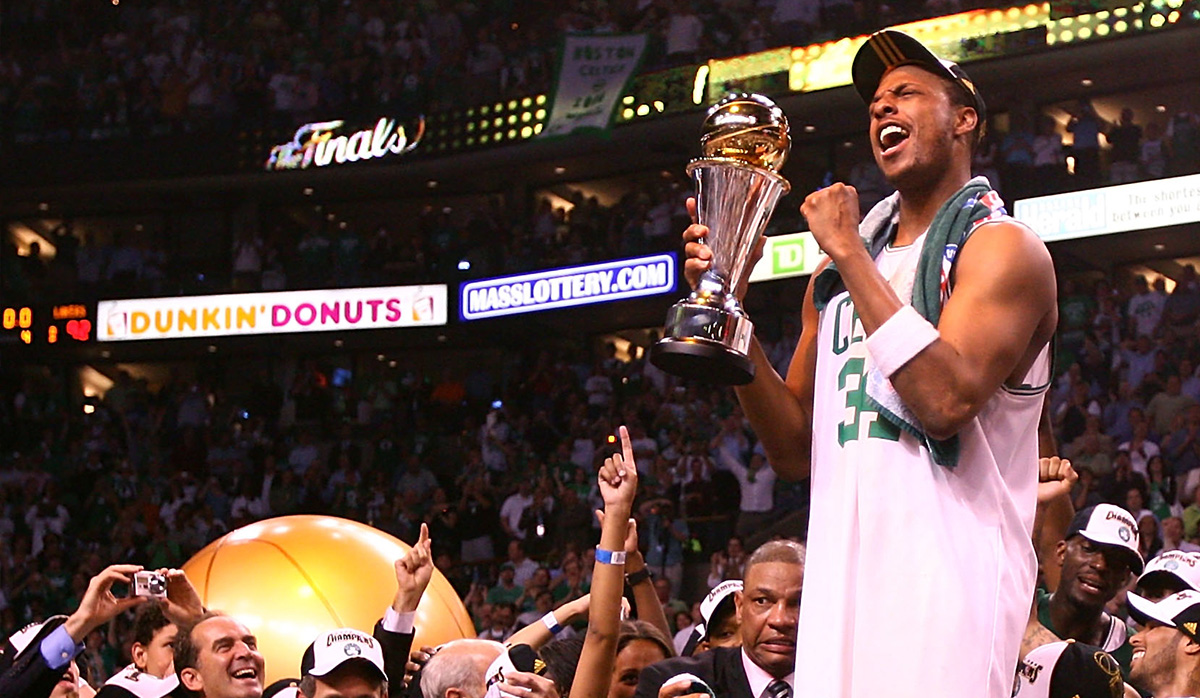 They say nothing good ever comes easy. That you always enjoy victory that much more after you've tasted the pain of defeat. That it's always more gratifying to reach the mountain top when you've failed many times before.

This is true whether you're playing high school, college, or professional sports. Hell, it's true of life in general. Those who have never lost, never truly know what it's like to win (besides Bill Russell. Every rule has an exception).

It has never been more true than in the case of Paul Pierce. Today marks the end of Pierce's tenure in Boston. An amazingly sad day for those who have watched him play over the past 15 seasons. Pierce resonates with his fan base like few other athletes do, and I think I know why. You see, much like most of us, success didn't come easy for Pierce. Instead he earned it. He earned it through his immense talents, sure. But he also earned it through the time he put in, through the loyalty he showed to the city of Boston, through the patience he exhibited when things were at their worst.

Pierce could have asked out many times along the way. During the 2005-06 season for example, the Celtics were in the midst of a 33 win campaign, and hadn't won a playoff series in three years. To make matters worse, there was nothing on the horizon that guaranteed any sort of turnaround. Antoine Walker was gone, and in his place the team had players like Mark Blount and Ricky Davis. Guys who were disappointing on the floor, but even worse, didn't give a shit when the losses started piling up. They had a few young guys with promise, but Al Jefferson hadn't yet evolved as a player, and Gerald Green was just an athletic guy who could shoot a little bit. Many stars in far better situations over the years have asked out of their situation, or just left.

Pierce didn't. Nor did he the next season, when things got even worse.

He admits that the thought crossed his mind, saying as much on last night's "Paul Pierce: Truth be Told" special that aired on Comcast Sports Net.

I thought about it. I really did. Told my family that I was thinking about asking to be traded. But something just pulled at me, told me to stick around

That is Pierce's entire career in Boston summed up in one, simple statement. Loyal to the very end.

Of course that loyalty ended up paying off. Like some kind of karmic retribution for his sticking around, the Celtics somehow spun losing the 2007 draft lottery into acquiring both Ray Allen and Kevin Garnett. Suddenly a team that had won just 57 games combined between 2005-07, won 66 during the 2007-08 season alone.

Pierce saved his best for that 2008 playoff run. He scored 41 in Game 7 of the Eastern Conference Semi-Finals against LeBron James and the Cavs, leading the Celtics to victory in the final minutes. In Game 6 of the Conference Finals against Detroit, he scored 11 of his 27 points in the 4th quarter as the Celtics erased an 8 point deficit and clinched their first trip to the Finals in 21 years. And then in those Finals, Pierce out-dueled Kobe Bryant, helping the Celtics clinch their first title since 1986.

Many folks point and say, "Well there's no title in Boston without Garnett and Allen". And they're right.

But to them I say, "There's no Garnett and Allen in Boston without Pierce". Pierce was the drawing card, the one whos star power drew two other stars to this city. You can't build a house without a foundation, and that's exactly what he was for so many years. The Celtics tore down the house around him several times before they found the right mix, but he was there through it all.

And now he's gone. The deal makes sense in the long term, even the staunchest Pierce fans will admit that. Three first round picks for three guys on the wrong side of 35 is a deal you need to make, no matter how much it stings.

But now for the first time since 1998, the Celtics need to find a new foundation. Whether that's Rajon Rondo, or some high school kid that we don't even know yet is unclear. But it's not Pierce anymore. And no matter how good a deal they got, no matter how many times you tell yourself that they made the right call, that still hurts.

Pierce leaves Boston as the 2nd most prolific scorer in team history. He's also 3rd in games played, 3rd in minutes, 4th in assists, 7th in rebounds, 4th in blocks, 1st in steals and 1st in three pointers made. All of the numbers are a testament to both his longevity and his greatness. But to anyone my age or younger, he represents something even more.

I was 5 when Bird retired, meaning my earliest basketball memory of Larry Legend was as the head coach of the Indiana Pacers. By the time I got into basketball, the Celtics were tanking for Tim Duncan, and Rick Fox was their captain.

Pierce took us away from all of that, and into a new era. Sure that era had some terrible times, but that's what made the past six seasons so special. You've got to struggle to appreciate success. Paul Pierce got that. He never quit on the city of Boston, and for that reason, this will always be his home.