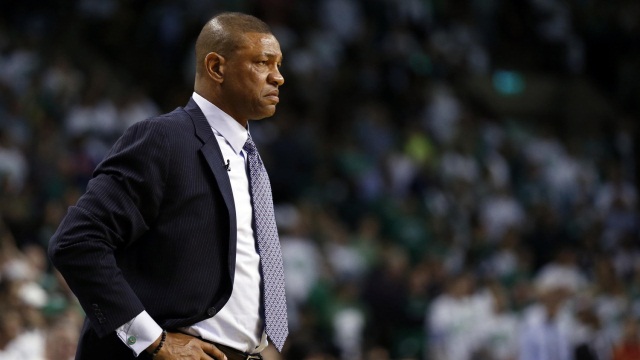 This is getting hysterical.

The Doc Rivers melodrama continues to play out in the media, with Doc, the Celtics and the Clippers remaining silent.

If Rivers becomes available, the Clippers would be interested in hiring him and would make him their No. 1 choice to become their head coach, the executives said.

But when asked if he could see Rivers joining the Clippers, one executive said:

“I don’t think so. It is very complicated. They [the Celtics] have a guy under contract. Maybe they’d let him out if this happened or that happened. It’s all very speculative.”

The Clippers recently asked for permission to speak with Rivers, but Boston's president of basketball operations, Danny Ainge, “turned them down,” one executive said.

Then there is the compensation Ainge would seek from the Clippers for Rivers.

Two executives said the first thing Ainge would want is young players such as Clippers center DeAndre Jordan and Eric Bledsoe, and an expiring contract such as Caron Butler’s $8-million deal.

Then Ainge would want to trade a veteran player such as 37-year-old Kevin Garnett (he has a no-trade clause) and add guards Courtney Lee and Jason Terry in the deal to the Clippers.


Just to be clear, this is an NBA executive speaking on what they think Ainge would ask for. Not what Ainge has officially asked for.

With that out of the way, this is the most absurd trade offer I think I've ever heard (not counting Rudy Grayson's).

So the Celtics ship Doc, plus KG and two bad contracts in Lee and Terry out West. In return they get two good young players, PLUS 2 first round picks, and the cap space that comes from dealing Terry/Lee/KG who are all under contract for 2-3 more years for Butler's expiring deal. I mean why not ask for Griffin and CP3 in a sign-and-trade while we're at it?

Obviously Ainge may not actually be asking for this absolute haul, but if he is, it's more clear than ever that this deal just is not happening. Like ever.

A Doc + KG deal for Bledsoe and Jordan could make some actual sense. It works financially, the C's get two young assets (instead of 4) and the Clips don't commit salary cap seppuku. Plus LA gets KG, therefore increasing their chances at retaining Paul. But this expected deal is so absurd, it's hard to even fathom the Celtics asking for it.