Now is not the time to trade Rajon Rondo 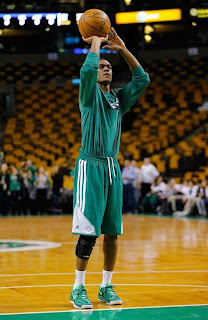 One of the many question marks facing the Celtics this offseason is the future of Rajon Rondo.  While the trade rumor mill is seemingly always spinning when it comes to the Boston point guard, it makes very little sense for the C's to deal him this summer.  According to the Boston Herald's Steve Bulpett, one NBA general manager had this to say about the situation:


“I haven’t heard his name being put out there like I have in the past. The thing is, with Rondo coming off an ACL (tear), teams will be looking to get a bargain, and Boston can’t go there. They’re better off letting him come back and show everyone what he can do again.”

There's also the fact that Rondo's contract is still a relative bargain.  He's going to make just under $12 million next year, which ranks him as the 40th highest paid player in the league; not bad for an All-Star regular in his prime who's led the NBA in assists per game the past two seasons.  Emeka Okafor, Ben Gordon, Nene, Hedo Turkoglu, and Kris Humphries will all make more than him in 2013-2014, just to name a few.

Related: We need Rajon Rondo back in order to get the good Avery Bradley back