We posted this video last night, but felt that what Pierce said maybe deserved a little extra attention.

The Celtics laid a huge egg on national TV last night. For a team that's been boasting about how tight they are and tough to beat, they didn't look like a group that could get past the first round. 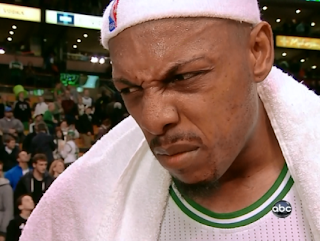 "We don't talk on defense. We let constant dribble penetration from the guards w/out helping. I mean it's obvious who the stars on their team. I mean Deron Williams and Joe Johnson. We can't allow their stars to go out there and have huge nights... We have to do a better job communicating, getting the ball out of their hands, so they don't have nights like tonight."


It was the type of game that the team probably normally wins, but this isn't the group of years past. A lot of fans are kind of just writing off the end of the regular season, pointing to year's past where the team has just turned it on in the playoffs. This is different though.

The Celtics are without Rajon Rondo and Jared Sullinger, the shock of those injuries may have worn off but their significance hasn't. Is the team going to really be trotting out Chris Wilcox and Shavlik Randolph in the playoffs? Is Jordan Crawford seriously going to be getting playoff minutes? This is a drastically different team from the one's that have tangoed with Miami in recent years.

As Pierce notes, the defense still isn't where it needs to be, and that's what the Garnett era Celtics have hung their hat on. Hopefully last night served as a wake up to this Celtics team, especially with a game against Miami coming up next.