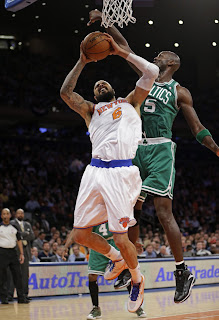 Doc Rivers says Kevin Garnett will play in Game Three against the Knicks Friday in Boston, despite suffering a hip injury in Game Two.

"He got hit in the hip, very similar to having a hip pointer in football. It’s affecting him. I was concerned he was grabbing something else," Rivers said. "In a couple timeouts, I was asking if he was OK."

It would take much more than a hip pointer to keep Garnett out of the playoffs, but this seems like one of those "If it were a playoff game" moments coming true. If Friday were a regular season game, Garnett would probably stay home. Being down 2-0 to the Knicks doesn't exactly give Boston much leverage on resting players either.

Garnett's already banged up with a bone spur in his ankle, along with the usual wear and tear of being a 36-year-old basketball player quickly approaching two decades in the league. If the Celtics are going to have any kind of success in this series, they need Garnett at his best which is getting harder for him to do with the injuries mounting.