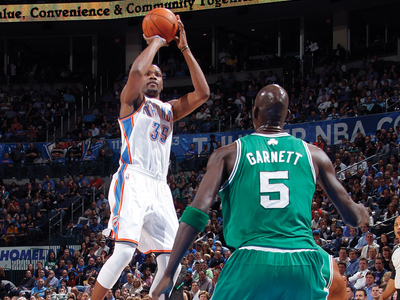 On the night of May 22nd, 2007 the fate of the Boston Celtics changed forever. That night in Seacaucas, New Jersey the NBA held it's draft lottery, and following a terrible 2006-07 season that saw the team lose 18 straight games on their way to a 24-58 record, the C's entered the lottery with an inside track on a top 2 pick. The reason that was so important? Well two franchise players just happened to be available, in Ohio State center Greg Oden, and Texas forward Kevin Durant. Both were considered franchise cornerstones, and their availability caused many Celtics fans (me included) to root against the team to improve their lottery position. When the C's shut down Paul Pierce late in the year with a "knee" injury - even better. Anything to lose enough games, and find our way into the top 2.

But then May 22nd came around and screwed everything up.

Boston, mathematically a favorite to land in the top 2 - instead fell to 5th, the lowest position possible. I can still remember seeing the Bucks logo being drawn for the 6th pick - and knowing our fate. It was devastating. At the time, the Celtics were two full decades removed from their last championship caliber team, and it seemed as though the wait would last forever. Durant and Oden represented a changing of the guard; someone to pair with a perennial All-Star wing (Pierce), a burgeoning PF with a beautiful post game (Al Jefferson), a freakishly athletic 21 year old point guard with massive hands (Rajon Rondo), and a big hulking 7 footer of whom no one truly knew what to expect (Kendrick Perkins). That group needed another star. They needed Durant.

Throughout the 2006-07 college basketball season I watched Durant, the gumby like scorer from Baltimore that could fill it up from everywhere. He was a future star. I can actually remember saying that he would average 30-10 in the NBA once he filled out, that his combination of size, speed, and scoring touch had never really been seen before. Oden was less exciting to me. I watched him play in the Big Ten, and help his team to the National title game. I also saw him float through many games, suffer a wrist injury that he couldn't shake until late in the season, and fail to dominate to the level I expected. It's not that I foresaw his injury history, just that Durant seemed to be more of a sure thing to me. The type of player that you could build a title contender around.

Instead the Celtics got Jeff Green. But of course, Danny Ainge had something else up his sleeve. After falling on their faces in the lottery, the plan shifted. Now instead of drafting someone to add to his core, Ainge would deal some of his assets for another star (and hopefully two) to pair with Pierce. First it was the rights to Green, Delonte West, Wally Szczerbiak, and a 2nd round pick to Seattle for Ray Allen and a 2nd round pick.

Acquiring Allen to pair with Pierce was nice, but not enough. Not yet. Ainge knew this, and re-engaged the Timberwolves on a potential deal for Kevin Garnett, hoping that the acquisition of Allen would be enough to convince KG to sign an extension with the Celtics. Thankfully for Ainge and the C's - it was. Jefferson, Gerald Green, Sebastian Telfair, Ryan Gomes, Theo Ratliff's expiring contract, and 2 first round picks was the price - and boy was it worth it.

I don't need to go into too many details on what has happened over the last six seasons, but safe to say, the despair that surrounded the organization on May 22nd, 2007 has been lifted.

The numbers are nice, but the memories are nicer. Garnett has changed the entire culture of the franchise, showing an appreciation for the teams history, and a sense of pride in wearing the uniform. Since the moment KG arrived the Celtics have been the ultimate "team", playing together on the court, communicating on defense, and never (Ok, rarely) taking a possession off . It has never been about one guy, but about the team as a whole - and fans appreciate that.

So the question of course - would you trade it? Would you trade all of those memories, forged over 500+ games (including playoffs), for a ping pong ball to bounce your way in the lobby of a hotel in New Jersey back in 2007. It sounds silly I know, but the question is very real.

Again, the C's were the 2nd most likely team (19.9% chance) to land the #2 selection and draft Durant. Not that their odds were great, but the fact is out of every team in the lottery, only Milwaukee had a better chance to land KD (if you assume Oden, a potential once in a generation type big man was going #1 no matter what). If it had happened, the Celtics would have had the following.

They also would have had West, Gomes, and their two 2009 first round picks (one of which was the incredibly valuable T'Wolves pick, which ended up being #6 overall). In terms of young, valuable assets - the 2008 Celtics would have been King.

Of course without KG in town, does Perk ever develop into an above average defensive center? What happens to Rondo's development curve without playing with a trio of Hall of Famers? Does Pierce demand a trade instead of playing with a very talented, but very young team? And if so - what does Ainge get for him?

The questions are endless, but so is the potential. The 'KG era' C's have won one title and came within six minutes of another. They are playoff warriors who get every single ounce of talent out of their roster once May and June arrive - but their book has basically been written.

The book on a Rondo-Durant-Jefferson trio could have gone in a million different directions, like one of those 'choose your own adventure' books from when you were a kid.

- They could be a legitimate NBA dynasty by now, joined by either Pierce, or whatever it is the C's got for him.
- They could be the equivalent of today's Thunder, an NBA championship caliber team that has not quite gotten over the hump.
- They could have failed. The mix of talent may not have worked, or perhaps a career altering injury, or some other freak incident occurred that derailed the group before they got started.

So again, the question is, what do you choose?

Garnett, Allen, the 2008 title, and all of the memories from the past 6 seasons?

Or Durant, Jefferson, and the seemingly limitless potential of the alternative universe group?

For me it's as difficult as a sports hypothetical gets - but I keep the Garnett era, for two reasons. One, much like a football coach who refuses to 'take points off the board' following a made field goal accompanied by a penalty, I refuse to take that '08 title off the board. While Durant, Rondo, Jefferson, and company may have 3 by now with 3 more on the way - they also could have zero. Titles are the most valuable commodity in sports, and I'm not messing with the one Celtics title in my lifetime.

Two, I just can't ditch what this era has meant to me. It's my favorite grouping of players in my sports lifetime, especially when you include the special relationship they have with their coach. There are very few teams that truly love playing with each other - but this team has. And while they've fallen short in three heartbreaking Game 7's, they've also won four. Kevin Durant is my favorite non-Celtic in the NBA, and by a large margin. He's everything you could hope for in an athlete, and more (plus his new Sprint commercial is FIRE - best commercial on TV) - but it's still not enough for me. I'm keeping the title, and the memories - but damn it it's not easy.