Danny Ainge says it's embarrassing for LeBron to complain about officiating

In an appearance on WEEI yesterday afternoon, Danny Ainge was asked what he thought about the hard fouls the Bulls committed on LeBron James Wednesday night:


“I think the referees got the calls right. I don’t think it was a hard foul, I think the one involving LeBron against Boozer, that was flagrant. I think the officials got it right. I think that it’s almost embarrassing that LeBron would complain about officiating.” 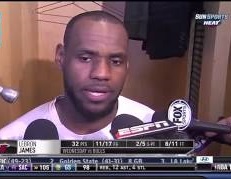 I couldn't agree with Danny more.  I often feel like LeBron has no concept of reality whatsoever, his sense of entitlement is scary.  He's the best basketball player in the world, but one of the things that makes him so great is that he's bigger and stronger that everyone who guards him.  A large portion of his game is based on using that to knock defenders out of the way.  The Kirk Hinrich play from the other night is a perfect example; LeBron tried to go through him (from the replay it looks like the perfect video for Roger Goodell to use for showing NFL running backs how to attack defenders without lowering their helmets).  Hinrich did the only thing he could do to stop him while being run over, and then LeBron whined about it afterwards.  Embarrassing.