Avery Bradley's getting props from everyone for his defense (including refs) 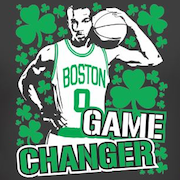 "[The referee] said, ‘I had one shoulder done and I was out six months and I still feel bad.’ I said, ‘That’s why you’re an official,’" Rivers recalled with a laugh. "I did see three bad calls after that, I said, ‘My gosh, I was just joking.'"

Both Rivers and Kevin Garnett admitted that Bradley is likely not 100 perent this season.

"Avery is everything to our defense," said Garnett. "I think he’s the anchor, if you will. He’s the true inspiration of what it is. He’s up on the ball, like 90-95 percent of the time. If you look at any other guard in the league, no one is playing defense like he is. He’s just tenacious man. I call him the silent leader and it’s by example."

Forsberg's whole piece is worth a read. There's more from KG and Doc in there, plus some stats to back-up talk that Bradley is one of the very best defenders in the league. Stats like this:


radley is second in the league while allowing a mere 0.678 points per play, according to Synergy Sports data (old friend Marquis Daniels is actually first among players with at least 200 defensive possessions this season). Opponents are shooting a mere 30.9 percent against him and generate points on just 31.4 percent of possessions against him (also second in the league). And that only scratches the surface as Rivers often points out how his ball pressure often forces opponents into their sets late and causes rushed shots that improve Boston's overall defensive numbers.

Just imagine what he's capable of when he's 100 percent.

I was actually hoping that the Celtics wouldn't bring Bradley back until he was 100% healthy. I didn't want the shoulder injury to be a nagging injury, but I'm not a Doctor, so maybe they decided that playing won't stunt AB's recovery. One silver lining with the Rajon Rondo season ending injury is it forces a larger role on Bradley's plate and makes him play the point more. Both experiences should help the combo guard moving forward in his career.

You can read the full column here; http://espn.go.com/blog/boston/celtics/post/_/id/4702911/bradley-shouldering-defense-for-cs