Wyc Grousbeck on Celtics quiet deadline: "I know what the offers were. You wouldn't have taken them." 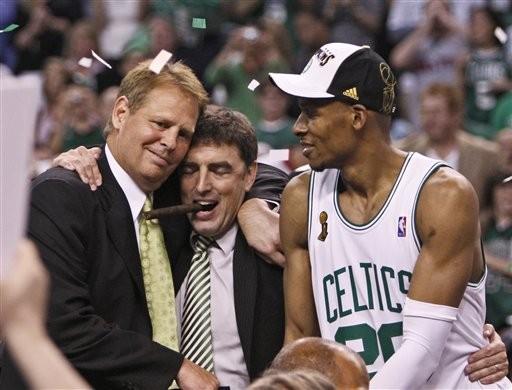 Last week the trade deadline passed with a whimper, the entire league passing on big deals as the new trade landscape seemed to cause clubs to avoid larger financial commitments at all costs. Among those teams that tested the waters, but didn't pull the trigger - the Celtics. Of course as last Thursday's deadline approached, rumors were flying about the team potentially dealing Kevin Garnett to the Clippers, or possibly Paul Pierce to the Nets. Every day it seemed as though there was a new rumor (or 4), but when the dust settled the only thing the Celtics did was ship an injured Leandro Barbosa and a bad Jason Collins to the Wizards for bench scorer Jordan Crawford. Why such a quiet deadline for Boston? Well today, Celtics owner Wyc Grousbeck seemed to answer that question; the offers just weren't good enough. From the Globe's Gary Dzen:

Wyc Grousbeck on why the Celtics didn't make a move at the deadline: "I know what the offers were. You wouldn't have taken them."
— Gary Dzen (@GlobeGaryDzen) February 26, 2013

Makes me wonder what the offers were. I think that most people would agree, KG for Eric Bledsoe and DeAndre Jordan was very fair in terms of talent, but couldn't happen because Garnett may be the most loyal human being on the planet. Obviously there could have been other offers for KG that Wyc is talking about, but if I had to guess, the unsatisfactory offers were for Paul Pierce. The one deal we heard rumored was the Brooklyn Nets offering up Kris Humphries, Marshon Brooks and a 1st round pick for Pierce, a deal that would not have given the Celtics any salary cap relief, and would have made them worse on the court. But were there others?

It was discussed right after the deadline, but the new 'repeater tax' that hammers teams that go over the luxury tax, seemed to play a huge role in clubs not offering up multiple first round picks and salary cap relief for big money players. That certainly seemed to play a role here, as Pierce (not to mention Hawks forward Josh Smith) did not seem to generate any legitimate trade interest despite the fact that he is still playing at an All-Star level.

Now that the deadline is in the rear view mirror and the Celtics are returning home, it's time to move on from all of the trade discussion, and start figuring out just how good this team is. But I'd be lying if I said Wyc's comments didn't make me very curious to what offers were on the table last Thursday. Oh well, I suppose sometimes the best moves are the one you don't make.