In defense of Danny Ainge

I have been away from the internet since the trade deadline passed, but I'm sure there's an outrage somewhere because "Danny Ainge hasn't blown this team up" or that "Danny Ainge didn't make any big moves." (Reportedly, Felger was ripping Ainge apart yesterday, and I'm not shocked to hear that from someone who doesn't know anything about the game of basketball) Even though those are reasonable frustrations, they don't make sense. At all. Yes, it is disappointing to see that your team hasn't improved direly as your one chance to do that expires. However, you need to realize this: You don't make deals just to make deals.

Why do teams make trades? To cut salaries, to improve in the short-run, to rebuild, or a mixture of all. (Or they might have Dwightitis, which is a rare but deadly case.) So guess what? Danny Ainge has tried to do exactly that. 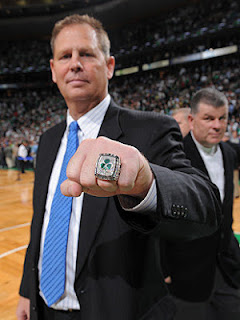 Fans of "blow the team up" ideology seem to forget their reasoning and focus on the outcome quite often. Kevin Garnett and Paul Pierce are going to come off the books in a couple of years. If you want to trade them away, you either get a star player of same caliber, or you get expiring contracts so that the team can start rebuilding soon. That is exactly what happened: The Celtics and the Clippers have discussed a deal that would send Garnett for DeAndre Jordan and Eric Bledsoe. It didn't happen because KG didn't want it to happen. Danny Ainge has shopped Paul Pierce for expiring contracts. It didn't happen, and the best offer we got was quite offensive: Mr. Kardashian, Marshon Brooks and a quite valueless pick. He made a run for Josh Smith (who wasn't traded anyways and he'll be a free agent this summer) He has even shopped Rondo to see what moves he can pull in the offseason or when he comes back. There is a reason the Celtics were reported to be one of the most active teams and that the GMs would be shocked if Ainge didn't make any moves. And he actually turned an injured/expiring contract and an unnecessary roster spot blocker into a valuable player. That's a smart deal.

See, it doesn't make sense to trade your great players for contracts that will tie our hands in the future. You cannot turn an old superstar into a young one, other teams aren't that stupid. You need to sacrifice something when you make a trade, and getting huge contracts in return of KG's and PP's would be suicidal with the new CBA. We're not the only smart team in the NBA. There's a reason this season didn't yield shocking in-season trades. Ken Berger has written a long column that complains about it. The best offer Atlanta got for Smith, who they know is walking away for nothing once the season ends, was Ekpe Udoh, Luc Mbah a Moute, Beno Udrih and a protected 1st round pick. The Hawks decided that they'd rather keep the cap room instead of receiving three average player with contracts of similar value.

The league is restructuring, and there are a lot of unknowns ahead. Not making investments in terms of contracts is a move that makes sense. "Well, when are we going to rebuild?" you might ask. My answer is simple: We've already been rebuilding. If you put aside KG, PP, and JET, the oldest player we have is 29 years old. We have become a young team with a lot of potential, and in two years time (maybe even sooner) we'll have room to attract one max. contract player. And yes, all this while we've remained competitive.

Yes, in theory, there's always room for improvement. Ainge could have made this awesome move that for some reason no one can think about. Yet he explored a zillion options, making it known that no one is untouchable, and what he got in return were deals that wouldn't make sense.

Please do not give in to the ramblings of Felger et al. We have a competent GM. Maybe he's not the best, but he constantly tries to improve this teams and mostly succeeds in doing so.