The Celtics we saw last night could win the NBA title, Version 2.0

Click here to read the original version from yesterday.  In the first half last night the Celtics played exactly as you might expect for a team on the road against a quality opponent on night two of a back to back, and they trailed the Hawks by 15 at the break.  But it the second half Boston exhibited the same defensive intensity we saw the day before against the Pacers. 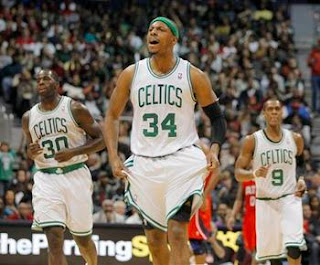 After holding Indiana to 31.8% shooting on Friday, the C's allowed Atlanta to shoot just 2-14 (14.3%) in the third quarter, and only 25% total after the intermission.  In fact, the Hawks made just 7 baskets in the entire second half.  Boston won the 3rd period by the ridiculous score of 33-9.  Paul Pierce scored 17 points in that decisive quarter, and finished with 26 (as well as 9 rebounds and 5 assists).

On the very first play of the game Rajon Rondo made a point of going after the rebound, and he pulled it down with some authority.  I said to myself "He's getting a triple double tonight."  14 points, 10 assists, and 10 more rebounds later he had it.

Brandon Bass also played his best game in a long time, shooting 5-6 from the field in 36 minutes, while posting 10 points, 4 rebounds, 3 assists, 3 steals, and one highlight reel block.

The Celtics are now 2-0 with Bass and Avery Bradley back in the starting lineup.  Since the beginning of last year Boston is 18-5 in regular season games when they both start, and 37-39 in all others.  The 19 point comeback was also one of the team's 7 best of the past 11 years.  Yes, two games is a very small sample, but this sudden turnaround is continuing to look just like last season.