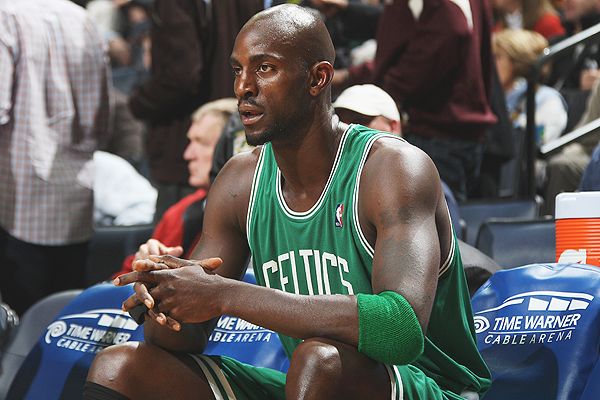 When you watch a Celtics game, it becomes obvious pretty quickly who their most important player is. It's not Rajon Rondo, despite the fact that he's the best passer in the league. It's not Paul Pierce, the 2nd best scorer in team history. It's Kevin Garnett. Even at age 36, in his 18th NBA season, it's Garnett who makes the biggest impact on his team.

KG has been on the floor for 904 minutes this season, an average of 29.2 minutes per game. During those 29 minutes - the Celtics are pretty good. They average 101.1 points per 100 possessions, and give up 99.5. Again not great, especially offensively. But the defensive number is well above average. In fact if the Celtics played that type of defense all game, not just when Garnett was on the floor, they'd be the 3rd best defensive team in the entire NBA.

Unfortunately for the C's, not only does the team slip on defense when KG is off the floor (which would be expected considering how good he is), they collapse like a dying star.

Garnett has been on the pine for 614 minutes a game, or 19.8 per game (Thanks to overtime games the Celtics have played an average of 49 minutes a game this season as opposed to the standard 48) so far in 2012-13. When the Celtics are without their best defender they give up an astounding 113.5 points per 100 possessions. That is considerably worse than the Charlotte Bobcats, who allow a league worst 111. Somewhat surprisingly, the team actually fares a little better on offense when KG is on the bench, scoring about 104 points per 100 times down the court.

However despite the slight bump in offensive performance, the C's are outscored 113.5-104.2 per 100 possessions that Garnett sits out. That is not simply a decline in performance. It's so terrible that it is making it borderline impossible to win games, despite the fact that the team is still playing pretty well when KG is on the court. In fact, let's again use the Bobcats as our crappy measuring stick. Charlotte has been outscored by their opponents at a rate of 8.5 points per 100 possessions this year, while the Celtics are outscored by 9.3 per 100 without The Big Ticket out there. They literally become the worst team in the NBA when he's not in the line-up.

So is there anything that can be done? Well besides hoping (praying?) that Brandon Bass, Jeff Green and the rest of the bench start showing signs of life, the best thing Celtics fans can hope for is for the calendar to change. Kelly Dwyer over at 'Ball Don't Lie' wrote about Garnett's impact today (link), and he harkens back to Garnett's increased playing time in the playoffs as the proverbial 'light at the end of the tunnel'.

The light at the end of this mediocre tunnel comes with the idea that, in a playoff series, Garnett can ramp up to the 36.9 minutes per game he played in last year’s postseason run. That six months of saving his legs could ease the Celtics into one last two month stretch to the Finals. That a team built for the postseason could finally get the chance to act as it should during the time of year it was bred for.


While it's true that Garnett's minutes are sure to increase as the season gets deeper, the problem for the Celtics is that if the team doesn't improve - that might not matter. The C's currently sit in 9th place in the East, the latest in the NBA season that they've been out of the playoff picture since the final day of the 2006-07 season. If they can't figure out what to do when Garnett is catching his breath, it's possible we may never get to see the playoff boost to his minutes that we saw last season.