Did Rajon Rondo decide beforehand that he would get a triple double? 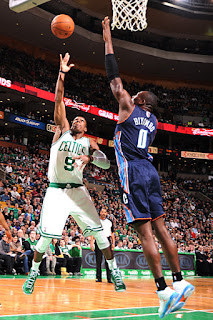 In Rajon Rondo's previous triple double (January 5th at Atlanta) he went after the very first rebound of the game with a little extra effort and gusto, as if he'd already decided what he intended to accomplish that evening.  Last night he began the game with that same mindset.  As he pulled down his 3rd rebound of the evening just over 3 minutes in, I swear he thought to himself "hmm, I have 4 assists and 3 boards already, but no points."  Five seconds later Rondo was converting a nice driving layup on the other end.  After 4 minutes he had 4-4-4, nearly halfway to the triple double with over three and a half quarters remaining.

By the time the night was over we learned that Rondo had been asked by reporters pre-game about his assists being down of late, and multiple times about the Bobcats emerging star point guard Kemba Walker.  For whatever reason these struck a nerve, and may have given him his extra motivation.  When questioned about this in his post game interview, Rondo said:

Because you told me my assists were down and I just wanted to just go out there and prove it to you that I can step up my game when need be. Greg [Dickerson] was asking me about Kemba Walker. I’m getting a little bit older and so the younger guys are coming in and I may have a mark on my back, being an older guy, made a couple of All-Star [Games], but I’m a target every night and I just want to go out and defend what I do best, and that is run the show. I made a lot of lucky shots tonight.


He was being sarcastic with the "lucky shots" remark; Rondo's 8-11 from the field was actually his best shooting percentage ever (73%) in a triple double game.  Regardless of whether or not the media was his inspiration, it seemed evident from the start last night that Rondo had plans for recording his 26th career triple double.