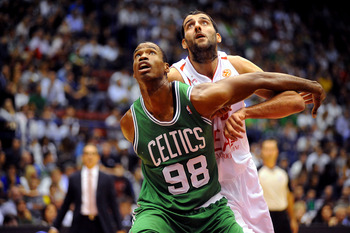 After the Celtics have gone through a miserable stretch of losing three straight games, Doc has decided to shake things up. Pretty dramatically too.

As promised, the other change now official..Jason Collins will start, Kevin Garnett moves to the 4, with Rondo, Terry and Pierce.

On the bright side there's this...

Rivers hasn't been shy about toying with this roster all season and really, nothing has worked. For that reason, it's hard to critique him for doing something more dramatic like this.

Jason Terry moving back to the starting line up isn't really that significant, since Terry was starting not that long ago. However, Collins taking over as the starting center is a huge move. Of course, that doesn't mean Collins is going to see 30 minutes tonight, however it is still extremely significant. The Celtic signed Garnett to play the 5, the fact that they are moving him back to the 4 out of desperation is a sign of something that's become painfully obvious to all of us.

Something isn't right with this team.