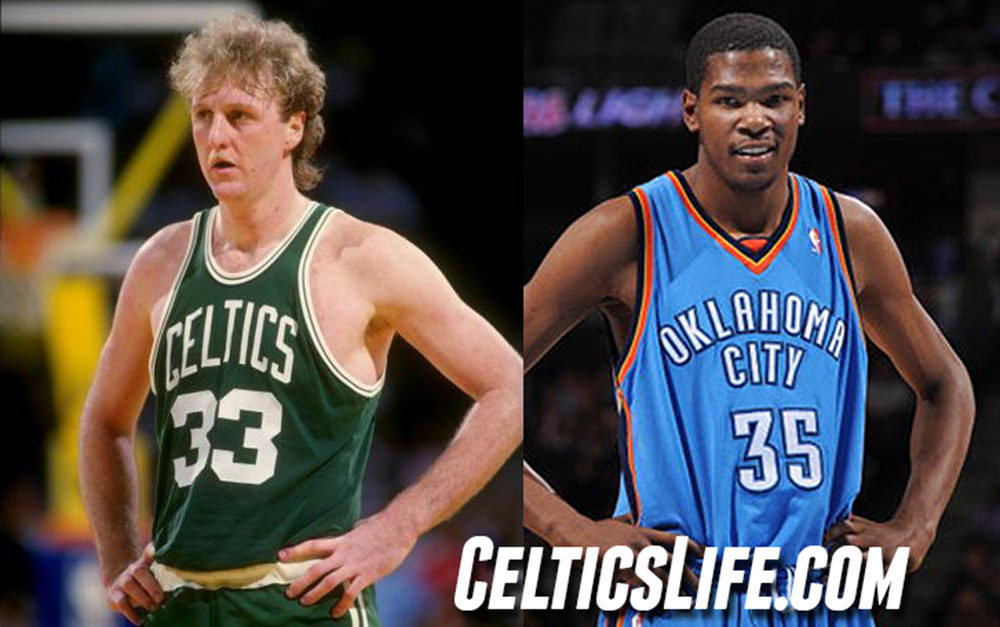 Having been born in 1988, Kevin Durant could have grown up emulating '90s NBA stars like Charles Barkley, Larry "Grandmama" Johnson, Hakeem Olajuwon, Patrick Ewing, Karl Malone, Scottie Pippen, KG or - the most popular fellow at the time - His Airness, MJ.  But credit Durant's throw-back brand of hoops to the fundamental play of Larry Legend.  In an interview with USA Today, Durant revealed his childhood inspiration with much admiration:

"Larry Bird is a guy I like watching," Durant said with a smile. "I watch film on him all the time. I like his approach to the game when he was playing. When I first started playing the game, my Godfather Taras Brown – who taught me how to play – he always was a Larry Bird guy, always used to look up his stats.

"So of course as I got older and started to watch NBATV, Legends games, and of course you here the stories about the rivalries with him and the Lakers and him and Magic, so I like his competitiveness, how low-maintenance he was, how he just went out there and did his job. He played hard. He played for the love of the game, and that's what I've got."


After reading about how KD took his lead from Bird, you begin to see how that adulation inspired and influenced his current skills - particularly with team play and that dagger three.  But while you can see Durant's got the competitive spirit in him too, Bird was never quite as cordial as KD (only Rondo comes close to duplicating Bird's assertiveness, acerbity and stoicism).

Interesting revelation and testimony from KD today.  If only he could have followed Bird's footsteps to Beantown.