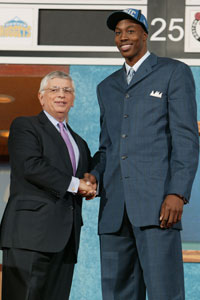 David Stern is at it again, wanting to change the rules of the NBA. This time it's after the Houston Rockets were able to effectively use the "hack-a-Howard" strategy to foul Dwight Howard away from the ball (not just in the final 2 minutes) and earn a comeback victory over the Los Angeles Lakers after Dwight missed about 50% of his free throws.


David Stern is all about the image and how games look on television — just ask Gregg Popovich and the Spurs — so you know he doesn’t like to watch hack-a-anyone. The league has effectively banned the strategy from the last two minutes of the game by making it two free throws plus the ball out of bounds if you foul off the ball.
And Stern told the guys from the Fox Sports New Orleans broadcast team (when he sat in with them for a bit Wednesday night during the Hornets/Lakers game) he tried to get it banned completely, but couldn’t. Thanks to Henry Abbott at TrueHoop for the transcription:


“I would have liked to have seen the rule changed to make the last-two-minute rule the whole rule,” he said. “It was getting to a point last year where, [in the] first period, they were just grabbing players. I think that’s ludicrous.
“We tried to change it to any time in the game because last year I guess it was everyone was fouling Tiago Splitter early on and the committee didn’t want to do it. And so that’s just the way it is. Because the reality is that there are a lot of basketball purists — and I understand that point of view — who say, ‘Hey, why don’t you learn to shoot foul shots? You’re supposed to be a pro.’”

I can see where he is coming from in terms of  preventing the game from becoming all free throws, which isn't what most fans want to see, but at the same time, why should the rules protect players who are bad at free throws?

What do you think about changing the rules to try and prevent the hack-a-Howard type strategies? Vote in the poll below.