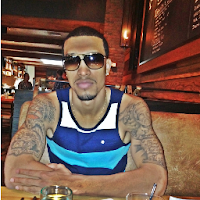 Some Celtics fans don't like Courtney Lee, but I remain a fan. If you were hoping to get an in prime version of Ray Allen then yeah you might be disappointed. But for the MLE, I think Lee gives you a lot. He can play D and shoot the ball. Unfortunately he's not knocking down a high percentage of jumpers this year and people have turned on him a bit. Hopefully after tonight's performance fans will become a bit more appreciative of Lee's game. Lee had arguably his best game as a Celtic tonight finishing with 10 points, 7 rebounds, 5 assists, and 3 steals filling in for Rajon Rondo in the starting line-up in the Celtics blow-out win vs. the Blazers. For Lee's part, he's well aware of his shooting woes and just tweeted about it himself.


In case you're wondering Lee has shot over 40% from beyond the arc for most of his career, so you can understand his frustration at his putrid 24% this season. But shooters don't just lose their stroke in their mid 20's. He'll start hitting them soon enough and people will start recognizing he was a solid addition to the team. In the meantime I especially liked how he filled out the stat sheet tonight. 5 assists and 3 steals are an adequate job in Rondo's place. 7 rebounds are great for a guard. Would love to see a couple of our better paid front court players grab as many. Give Lee a shot. He'll be fine. In the meantime I love people that can make fun of themselves. Much better strategy than be overly sensitive to criticism.

Thanks BRock for the tip.