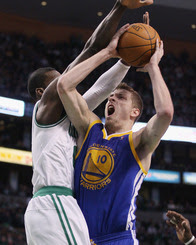 The Celtics (14-15) failed to get the win against the Warriors (21-10) without Rajon Rondo, and looked pretty bad in the process.

Rondo sat out with a hip and thigh injury and the Celtics needed everyone else to pick up the slack, which they didn't.

Paul Pierce, Jason Terry and Jeff Green shot 12-50 and the team as a whole shot 36 percent. While Golden State couldn't miss, shooting 51 percent from the floor.

The games high scorers were Stephen Curry with 22 points and David Lee with 20.

For Boston, Kevin Garnett had six points, three rebounds, four assists and a couple steals, Pierce finished with 13 points, four rebounds and three assists and Courtney Lee had 18 points and was 2-3 from the three-point line.

The first two Celtics in double figures were Lee and Jared Sullinger. Sullinger had a good game, scoring on his first four shots, finishing 6-8 for 12 points and eight rebounds before leaving in the fourth quarter with a bloody nose from a shot from David Lee.

The Celtics fell behind early, trailing by six after the first quarter and 20 in the second quarter. They cut the deficit to eight in the fourth quarter after an 8-0 run, but Jarrett Jack quickly scored five straight to push the lead back to 13.

Leandro Barbosa was also unavailable for the game, leaving the Celtics with only two true guards and forcing Doc Rivers to use Kris Joseph as a guard.

Rondo was injured in the previous game against the Clippers and may miss the next game against Sacramento on Sunday. Rivers said after the game he had no idea if Rondo would play or not.

The next game could be an audition for big man DeMarcus Cousins, who the Celtics have reportedly been interested in trading for.

Pierce has been pretty big in the past few games, but his shot was so off tonight I would not be surprised to find out he is fighting some nagging injury or illness.

Green did contribute in other ways besides scoring with nine rebounds, two steals and two blocks in 34 minutes. He was the only Celtic to finish with a positive plus/minus at +5.

Jarvis Varnado, who the Celtics recently called up, saw minutes with Boston and scored his first point on a free throw.