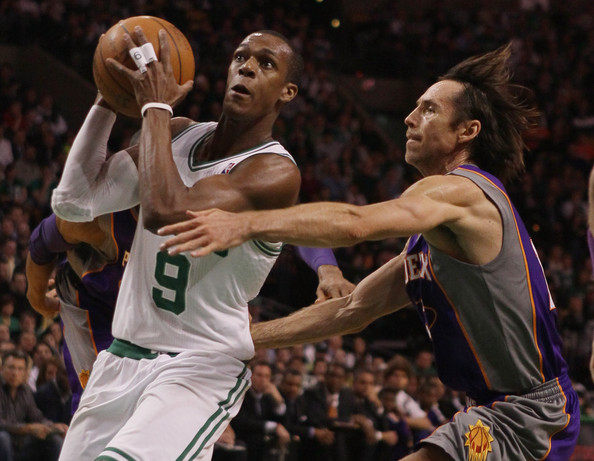 Is it too early to start the campaign for Rajon Rondo as MVP of the 2012-2013 NBA season? Never too early to try…. It’s been almost ten years since Steve Nash or anyone won the MVP with stats similar to Rondo. I’m going to break down Rondo’s season so far stat wise vs. Steve Nash’s 2004-2005 season to make my point because you can always find stats to make your argument work and also 60% of the time it works every time. All stats are from Basketball Reference.

Rondo is currently 5th overall in minutes per game with 38.5 and 18th overall in minutes played with 500. Obviously he’s taken the assists to a whole new level this season by leading the league in total assists with 178, assist per game with 13.7 and in assist percentage with 57.4%. On top of setting the table for all the old guys to get their buckets, Rondo also is setting a career high in scoring with 13.5. He is 20th in overall field goal percentage at .517 and 20th in total offensive win shares. He is also still playing solid defense like he usually does, 8th in steals with 25 and 9th in steals per game with 1.92.

Nash during the ’04-05 season was 1st overall in assists with 861 and assists per game 11.5 and was 4th overall in offensive rating. However the rest of his stats weren’t close to the NBA league leaders besides the Suns record that was a league best 62-20. So the argument is that Nash was the best player on the best team that season, at least record wise. If I lost you with breaking down the numbers with my meanderings, here are the stats head to head:

As Rasheed once said, Ball Don’t Lie… Stats are real close, team record is yet to be seen although I don’t see the Green winning 62 games. So why can’t Rondo win this year’s MVP? I think any other team would be successful, at least regular season wise, without their best player besides the Celtics. We rely on him to do so much without him we would crumble; he is by far the most valuable player to their team in the entire NBA. Post in the comments section for arguments for any other player that you think is MORE valuable to their team than Rondo is to the C’s.