Rajon Rondo vs. Deron Williams: by the numbers 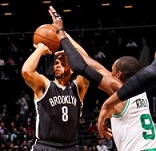 With Derrick Rose out, Williams and Rondo are unquestionably the cream of the crop at the point guard position in the Eastern Conference.  The first time their teams met (a 102-97 Nets win in Brooklyn win two weeks ago) Rondo missed the game with a sprained ankle.  But tonight the two All-Stars will get a chance to go head to head.  In past years when asked who was better, most non-Celtics fans would probably lean towards Williams.  So far this season there's no debate, the numbers suggest it's clearly Rondo: