Lakers-Celtics and the ties that bind them 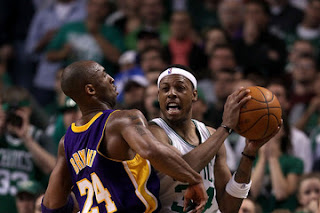 We are having an outlier experience where down is up and up is down in this bizarro season of 0-2 start for the  Los Angeles Lakers and the Boston Celtics. I was overjoyed to see the Lakers struggle out of the gate. I was not so thrilled to see Boston's new 'Big Three' play so passively during this 0-2 stretch.

Friday night's loss to the Milwaukee Bucks showed a team that lacked passion, aggression and overall hustle. Boston let Montae Ellis and Brandon Jennings, chuck-n-duck their way to the hoop again and again.

When the Celtics threatened a run, Buck's coach, Scott Skiles put the aforementioned two in the game and the Celtic run was effectively neutered. It was a painful thing to watch this team with no discernible identity.

The Lakers, well it comes down to whether or not Kobe can letup and allow Steve Nash to help him lead. Your guess is as good as mine if that will happen.  This season may end up being a repeat of a Karl Malone-Gary Payton-type era for the purple and gold.

They are pinning their championship hopes on a 38 year old Nash, who is presently on the injured list.  And Kobe's sore foot.  Pau Gasol doesn't have the chutzpah to do anything but follow, and the player formerly known as Ron Artest  still has bats in the belfry.  Dwight, well his free-throw woes offsets his offensive production. There is also a lack of any sixth-man potential on the bench.

The Celtics on the other hand, have an assortment of moving parts that haven't found their groove yet. To begin with, Doc cannot allow Kevin Garnett to play in the middle all season long.  Darko should be the starting center a la Kendrick Perkins and slide KG back to the four. Then after his first five bring him back in the middle.  His energy-level is almost non-existent, he may be hurt.


Boston has younger and more versatile pieces with Green, Lee, Sullinger, Bass and the recovering Avery Bradley. Veterans Jason Terry and Chris Wilcox add to the mix that will see significant playing time.

Pierce is like a captain should be, a steady hand when one is needed and Rondo has to attack more to make it all work.

Gang-green has a significant advantage in overall talent even though the Lakers are one of four teams,who have a better chance to be in the Finals.

Both teams had a major overhaul of their roster and it will take time for the rotational players to understand what is required of them.  In Boston it is all about defense; the other Laker players just have to get out of Kobe's way and be thankful for the scraps.