Kevin Garnett is more important than ever for Celtics 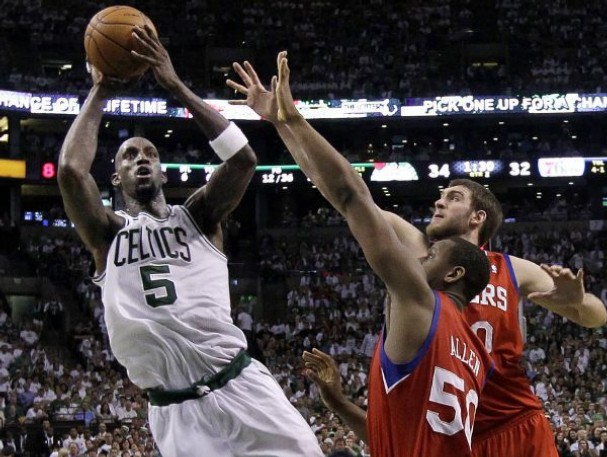 What has been arguable is just how much of an impact KG has had on the other side of the ball. Garnett has never been one to call for his shot, and has repeatedly downplayed his own significance within the team's offense. But Garnett is wrong, the team is growing increasingly reliant on his offensive contributions. Over the past two seasons, how the Celtics have gone within the won-loss column has been directly proportionate to how involved KG is on the offensive end. Let's take a look at the numbers.

Simply put the C's are playing like a #1 seed when KG shoots the rock, and like a #8 seed when he doesn't. And this is no small sample size fluke, the Green have now played in exactly 100 games since last season tipped off, including playoffs. So far this season the Celts are 4-0 when KG hoists 15+ shots, and 4-6 when he shoots 14 or less. In other words, the trend has continued.

Now as you'd expect, this hasn't slipped past one Glen 'Doc' Rivers. Doc seems to think that part of the issue is that Garnett doesn't always demand more attention from his teammates. Take a listen (question at the 2:02 mark).

Last year's run seemed to begin when Garnett was switched from power forward to center right after the All-Star break, but maybe we were missing what really happened. Garnett began shooting more, that's all. He averaged just 11.4 shots per contest before the ASG last season, before picking it up with 15.0 FGA after the break. It wasn't where KG was playing after all, but how he was playing that fueled the run.

Tonight Garnett will be going head to head with Brook Lopez and Kris Humpheries, two below average defenders. Whether or not the C's win will depend heavily on how aggressive KG is in exploiting the match-up.

Thanks to Green Street for the video