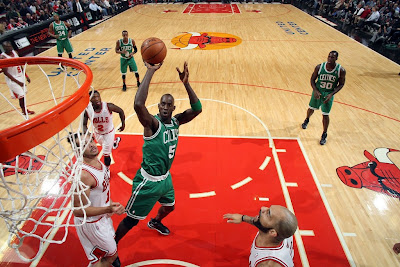 The Celtics had a pretty good team win against an injury riddled Chicago Bulls team.  This is not an indictment on the win, but how well they came together defensively.  The dreaded KG swoon did not occur.  When Doc took KG out of the game, the team did not fall apart.

There is also Rajon Rondo, who is starting to find players in their preferred spots, with Jason Terry being the primary beneficiary.

Boston now has a 4-3 record and we are beginning to see Doc and Danny's vision take hold.  They can come at you in waves. There is Leandro Barbosa and his ability to get his shot at odd angles. Then you have Rondo's improved trust in his own ability to shoot the ball.

This can be a dangerous team in the post-season.  But, there are two glaring weaknesses that can and will haunt them.  Chris Wilcox is the only other 'big' besides Jared Sullinger who has a nose for the ball.  We are not including KG. because KG will do KG.  This is a vulnerability that Miami and other teams take advantage of against Boston's forwards all the time.

Chicago out rebounded Boston 37-31 and they barely survived.  We cannot simply blame it on the lack of rebounding.  The team went through a horrendous scoring drought with Leandro Barbosa at the point.  It's doubtful Avery Bradley's return can solve this issue. On the other hand, AB has surprised us each and every year he has worn the green.  So I wouldn't be surprised if he has improved his play-making skills.

Doc cannot allow Rondo's minutes to escalate during the regular season.  If AB has not done as I suggested the C's may be willing to trade a late-second round pick for someone who can provide some relief for Rondo. This may be a moot point 20 games into the season if Barbosa will stop trying to be like Rondo and just be the scorer that he is.


The best thing about the whole evening, happened to be a very heady play by Sully.  The rook showed great awareness of a late-clock situation at the end of the third quarter.  Chicago dared the rookie to score by leaving him wide open at the top of the key.  Sully calmly received the ball and drilled a wide open three giving the C's much needed breathing room.

As you can see there is cause for excitement in this win over the Bulls, which adds another layer to the trust and chemistry they are building.