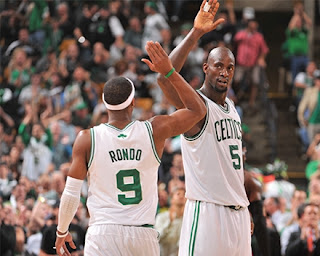 If you have been to or watched any Celtics game on TV in the last 6 years, you would see either Kendrick Perkins or Kevin Garnett calling and directing defensive plays for the team.

Perk is no longer here, and Rajon Rondo has  taken up the slack.

In game one, KG's voice was silenced and Rondo became indecisive with his new role as on-court leader.

This was not the Rondo that we had become accustomed to.

He is the anointed head-traffic cop on the court and his vocal leadership has always been key to the team's success. Maybe the enormity of knowing that the bulls-eye is on his back got him rattled.

We know he will bounce back, because Rondo rarely makes the same mistake twice and needed the live-game action to consummate his role.

Tonight's home-opener against the Milwaukee Bucks, should give Boston an opportunity to do a little fine tuning against a lower echelon team. The Bucks are not supposed to be a threat, but as you know the game is played on the court.

The Celtics bench should get the bulk of the minutes in the fourth quarter if the starters show the mow-them them down mentality on defense.

Jason Terry has been quoted as saying that, "he hated practice, until he came here." Paul Pierce used to balk at practicing hard when Doc first came to the team.

Today the captain is saying things like this to CSNNE:

"We have to do a better job of talking to each other," said C's forward Paul Pierce. "Transition defense, number one. That's something that we emphasized (Thursday) morning, we need better communication."


Pierce is right, it is about communication and the Celtics need to take the muzzle off and let other teams feel the rabid defensive pressure that the team is known for.

The return of Avery Bradley will bolster the attack and also put the 'D' and bite back in the 'beware the dog' sign in the Celtics on-court demeanor.

I dare say tonight's game will show Doc Rivers' team making a more concerted effort to adhere to their defensive roots. And in the end we will be saying 'they are who we thought they were'... a defense first team with a lot of offensive weapons.