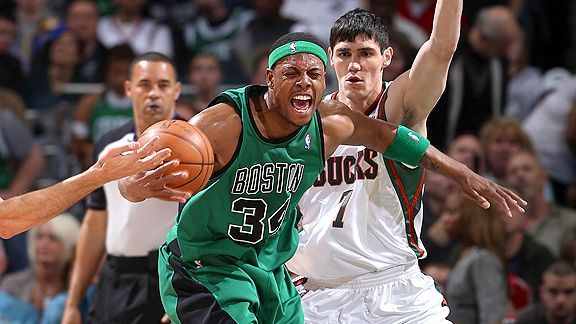 A lot of the same old problems. Turnovers were very bad. 10 in the first half. A lot stemmed from trying to do too much or being lazy. The team also couldn't stop the Bucks from scoring in the paint. They had 26 points in the paint in the first half. The Celtics kept the game pretty close the whole time, and actually took the lead on a run in the third quarter. The Bucks came back and soon the score became tied. Bucks lead going into the fourth. Both teams went cold. The fourth quarter went back and forth for a while. The Celtics started to go on a mini-run. Score still kept going back and forth. Celtics went on another run and took a 5 point lead with 2 minutes remaining. Bucks still threatened. The Celtics eventually closed them out, although they made it interesting by continuing to miss free throws.

Jeff Green played again today. Was ineffective trying to score, was ineffective trying to establish post position, was ineffective trying to be a playmaker, and was ineffective trying to set screens.Came alive a bit in the end of the third and it carried on into the fourth quarter. Showed some fire for the first time this season. Made some very nice plays down the stretch.
Rajon Rondo turned the ball over a little too much, but he was thrown off of his game in the beginning with several no-calls from the referees. Had an injury-scare in the third quarter.
Kevin Garnett scored well, but his rebounding wasn't great tonight.
Paul Pierce scored and rebounded well. His rebounding has been good so far this season. He got to the line a lot, and was one of the ones who came out of halftime with renewed energy.
Jason Terry had energy and provided some good scoring.
Chris Wilcox looks better every game, and in this one he brought aggressiveness.
Brandon Bass rebounded decently and brought energy, but made some dumb plays.
Courtney Lee was worthless

What does this mean:

Celtics got the win and showed some better energy. Jeff Green looked like he finally woke up. The Celtics still have a lot of problems however. This was a nice step in that direction. Bulls next on Monday. Another story most will not talk about: Rajon Rondo's streak of more than 10 assists a game in 27 straight games ended tonight. He was tied with John Stockton (1990-91) for the longest streak in NBA history. RIP. His minimum of 10 assists per game is still alive though (30 games). It stands alone as the third longest in history.