Championship or bust is a terrible way to live 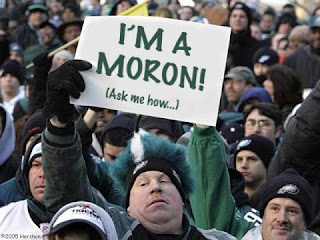 It's been awhile since my last post on CelticsLife. I was thinking about a few article ideas when yesterday I read the Facebook comment below from some idiot about yesterday's preseason loss. I won't say the name because someone this stupid probably has enough problems as it is.


"I dont know what was so impressive...and I dont know what Danny saw in Green and Sullinger cause they both dont belong on this team...they have the mindset of Rondo....(selfish) player. Looks like another losing season."

I'm not sure what team this guy is talking about, but last time I checked Rondo led the league in assists and we were one game away from the Finals. This is one of the most ridiculous and stupid comments I've read in a long time.

It brings me to my point. Why do people see success as so black and white? If you don't win a title you're a loser? That's going to be a tough life if you go with that mindset.  Judging from some of the comments I see on blogs and websites a lot of people think that way.  Do we not remember the 90's? We have been one of the top 5 teams in the league the last five years and have gotten to see two of the most unique players in NBA history(Rondo and Garnett) on a nightly basis. This negativity everytime we lose a game is just weird to me.

Last season was a huge success to me. Yes, I would've liked to win it all but I'd also like to own a Dunkin Donuts franchise. People really need to gain some perspective on how sports work. For most sports fans your team will not win the championship for 99% of your life. Are you going to see your sports fandom as a 99% failure? I'd rather support my teams win or lose and have fun watching. Sports are supposed to be fun, not work.  There's my rant for the day. Let me know what you think.