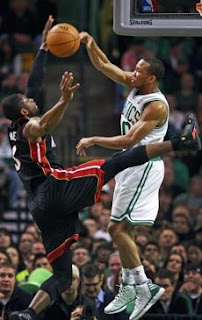 According to WEEI, the Celtics exercised the 4th-year option on Avery Bradley, thus securing his contract until the end of the 2013-2014 season.

The Celtics on Tuesday, hours before their season opener in Miami, picked up the 2013-14 team option on guard Avery Bradley worth $2.51 million. Bradley is considered the best on-ball defender on the team and one of the very best in the NBA.

Bradley, who will turn 22 on Nov. 26, had procedures on his left and right shoulders in the offseason after playing with significant pain in the playoffs last season. Bradley will miss the start of the season while rehabbing and building strength in his shoulders.

Bradley, who is entering his third NBA season, will make $1.63 million this season and also has a qualifying offer for the 2014-15 season worth $3.58 million. In two previous seasons, Bradley has averaged 5.6 points in 95 NBA games, incuding 28 starts.


We saw Avery's talent during his break-out year last season. His defense made Jameer Nelson whine and his block on Dwyane Wade will be forever remembered by Celtics fans. But we also have to consider that he has been through surgery on both shoulders and we are not sure of his capabilities upon returning from injury. He is young and I am confident he will heal quickly and get back to his regular form, but what do you think the Celtics' move to keep him until 2014 without seeing the effects of his surgeries first was wise? We are getting a pretty good deal for Bradley in terms of his salary with respect to what he provides for the Celtics. Sound off in the comments below.