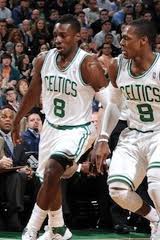 The pickup games in Waltham have been competitive. Joseph, Christmas, and rookies Jamar Smith and Jared Sullinger have been tutored by Rondo, Jeff Green, and Jason Terry.

“All the vets, they’ve really been taking us in because we’ve been putting in the work and they see that, that doesn’t go unnoticed,” Joseph said. “If you come to an organization like this, that’s all they want to see is guys work hard because we have a reputation to uphold.”

Joseph is a natural small forward but may be asked to play multiple positions. Asked to describe his position, he said, “Wing. I just call it a wing, you know what I mean? I’m sure I’ll be more looked at as a [small forward] but we all have the same assignments.”

I wonder why Fab Melo's name was omitted. I know he's been in Waltham. Courtney Lee and Kris Joseph have boasted about dunking on him. But obviously this piece of minor news is positive stuff. The Celtics best player Rajon Rondo enjoyed his summer, but now he's back to business. It will definitely help the Celtics rookies to get in some reps with Rondo, but I think Jeff Green getting some extra time with Rondo can only help as well.

Jason Terry will mesh with the Celtics system flawlessly. I'm sure of that. Green still needs to find his niche. Working with Rondo can only speed up that process. I also think Sullinger will have a substantial role during his rookie season (and for years to come), so again the extra time with the team's point guard can only help.