Looks like Scal could be in Boston for the long haul 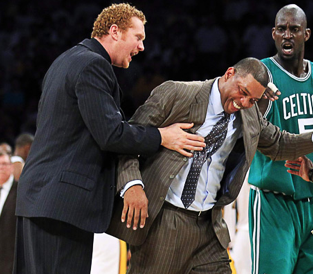 Zona Dostres this week sat down with Brian Scalabrine to of course discuss his European playing experience and his future. The following question I felt got the most interesting answer out of Scal.


Zona Dostres: "Where do you picture yourself in, let’s say, ten years from now?"

Brian Scalabrine: "That’s a good question, but I will answer that question for you -I’m not a long-term planner, I’m more a short-term planner. I have that kind of mindset -what can I do now, what can I do to improve. But ten years from now I picture myself being a color commentator for the Boston Celtics, following the team around. Still working on my job, getting better and better. If I could do that for the next ten years or the next thirty years I would be really happy. That’s my new goal now, be attached to basketball and learning from new players and stuff like that. That’s what I think now but hey, maybe I’ll play again in Europe and who know (laughs). To be honest with you I really miss playing in Europe. It was so awarding to get to play so many minutes. I miss playing forty minutes there, going to practice every day… I really miss that."


It's looking more and more like Scal will be sticking around in Boston and when Tommy one day steps down from announcing, Scal will be riding shotgun with Mike Gorman. I think the "maybe I'll play again in Europe" part at the end was just Scal pandering to the interviewer. Scal could eventually make the switch to being an assistant coach (he had accepted that position with the Bulls, before changing his mind and taking the CSNNE gig), but it appears he's going all-in on the broadcasting career. I'm glad it will be happening in Boston.

You can read the full interview here.