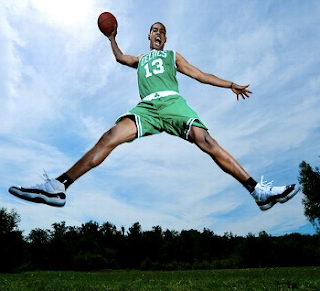 "He's making strides," said Joseph. "He's in better shape, he's trimmed down tremendously. He's a guy I've been with for two years, and I remember his jump from his freshman year to his sophomore year, and he puts in a lot of work that people may not see all the time. But I was there, personally, and I saw the hard work that he puts in and his dedication to the game. So, since summer league, he's really been doing well, pick-and-rolling like they want him to, dunking, blocking shots. He's doing all the things necessary to win basketball games."

I don't believe the Celtics drafted Melo to contribute much this season. 7 footers that can contribute as rookies don't last until the 20's in a draft. I think Danny took Sullinger to help the C's this season and Melo for down the road. Not to say that Doc wouldn't play him if he ended up picking up the game much faster then it usually takes, but that would be a bonus. The goal in drafting Melo was to take a shot on a talent that could potentially become a starting NBA center.

It's a great sign that Melo is getting in better shape. Often guys will lose some body fat prior to the draft, but then put it back on after they've got the guaranteed contract. The fact the Melo continues to improve his physique is a great sign that he is willing to put in the hard work necessary to make it at this level. I hope fans are not too hard on Melo this season, as he's still learning the game. I think a year from now we can better guage what type player he will be. So far he's on the right track.