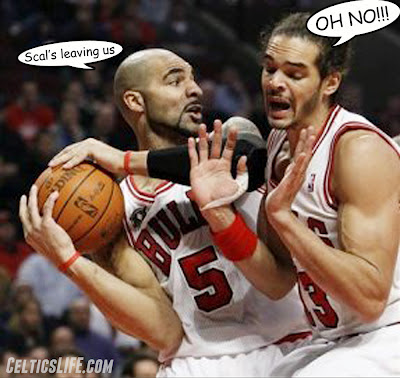 White Mamba Brian Scalabrine announced yesterday that he was retiring from the NBA and returning to the television booth as color commentator for Celtics games.  In choosing to join the C's broadcast team, Scal turned down a seat beside Chicago Bulls head coach and old friend Tom Thibodeau as an assistant.

While this decision had been hard for the White Mamba to make, the news of it seemed even harder to bear for his former Bulls teammates Carlos Boozer and Joakim Noah.  Of course, Afternoon Delight only presumed the gist of the conversation here between the two Bulls.  Nobody had any involvement whatsoever in making Noah look like the wansy (whiny pansy) he is seems to be here.  :-)