Afternoon Delight: The Elephant in the Room 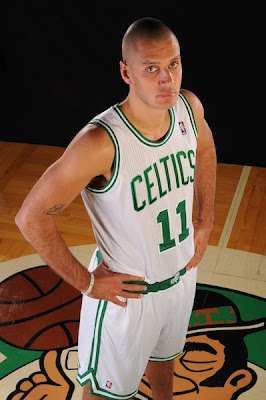 So last offseason when the Celtics re-signed Sasha Pavlovic I wrote, "Banner 18!!! In the bag, "and I believe without the Avery Bradley injury the Celtics very well pick up #18 last season. With that said, I'd be remiss if I didn't question that with the huge loss of Sasha Pavlovic this season (traded to Portland in order to accommodate  Courtney Lee's sign-and-trade contract), do the Celtics still have enough to get banner 18?

I mean losing Ray Allen is one thing, but you can replace him with a Jason Terry or Courtney Lee. But Sasha Pavlovic? How do you replace him? It would be like losing Rajon Rondo. Don't believe me? Well ask Rondo.  He's on video record of saying he's not sure who would win a 1 on 1 game versus Sasha.

The loss of Sasha Time is the elephant in the room standing in the way of the Celtics path to #18. Unfortunately, NBA rules prohibit the Celtics from requiring Pavlovic for a full year, so the Celtics will have to go about this campaign without him. Sure the Celtics have a lot of talent and yes I still think they have a shot at the title. But let's be honest here, losing Sasha makes the task much, much harder.


p.s. Mike Saver also points out that Portland now becomes a major sleeper in the Western Conference with Pavlovic on their roster.

Related: Rondo not sure who would win 1 on 1 against Sasha Pavlovic
Sasha Time strikes again! BOS: 78 MIA: 66