Thanks Mike Harlow For Blowing the 1985 Title 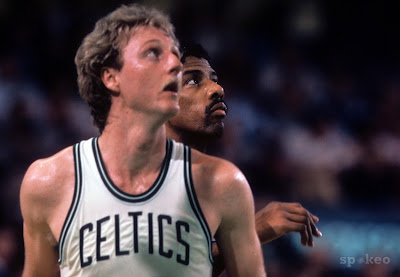 As devastating as it was to lose the 2010 Finals, a big part, of why I wanted the Celtics to win that series so much, was to make up for their loss in 1985.  When they had the MVP, Larry Bird, and home court advantage in the Finals.  The Celtics were looking to repeat that year.  But something other than the Flakers may have contributed to them not being able to do it.


On the night of May 16, 1985, in the middle of the Eastern Conference finals between the Celtics and Sixers, Bird was apparently involved in a scuffle that started at a now-defunct bar called Chelsea’s and spilled out to the corner of State Street and Merchant’s Row. After the altercation, Mike Harlow, a bartender/former Colgate football player, claimed he was sucker-punched by Bird. Nick Harris, a man who was with Bird and Quinn Buckner on the night of the incident, was treated at Massachusetts General Hospital’s emergency room that night.

Bird and Harlow, then Harris and Harlow allegedly got into a shouting match and a fight allegedly broke out between Harlow and Harris as the altercation moved outside. Massachusetts General Hospital had a record of a 39-year-old Nick Harris receiving emergency-room treatment on May 16, 1985.

An eyewitness who asked to remain unidentified said, "I don't know what happened inside over there, but there was noise and a scuffle as they came across the (State) street. Then Larry Bird went 'boom,' a nice swoop over the top with his right hand to the left side of the face."

Asked if he was certain it was Bird, the witness said, "I know what he looks like, and somebody that size you don't mistake. He was wearing a baseball cap with some insignia on it and a warm-up jacket. There's no doubt in my mind. He hit him and then a couple of guys from Chelsea's grabbed him and pulled him back inside."

There was a lawsuit and a settlement. The Celtics told Bird to stay away from Harris. None of the parties ever talked about it.

Not in any book Bird partook of with Jackie MacMullan or Bob Ryan.  No interview.  Nothing.

Back in 1985 the rumor had been making the rounds for weeks, when Dr. Thomas Silva, the Celtics' team physician at the time said, "I was approached by Jack Joyce (NBA director of security). There were rumors that Larry had been in some kind of altercation. I told him that I had examined Larry's finger and that there was no evidence of human bite marks or abrasions of the face or hand. And we know that the condition of Larry's finger is such that he cannot make a fist."

"As far as I know, nothing happened," said GM Jan Volk at the time. "It's a rumor. I know I saw him hurt it in that third game against Philadelphia."
However Harlow disagreed.

"It happened," Harlow said. "He sucker-punched me in the jaw."

So who are Mike Harlow and Nick Harris?  Where are they today?  Whatever came of this case?  Did Larry punch him and if so, with what hand?  Bird shot 46 percent in the ’85 playoffs. In his other two MVP seasons (84 and 86), when the Celtics won the championship, he shot 52 percent each year.  However after that apparent incident, the final 8 games of the playoffs, Bird shot just 40 percent (63-156).  Is this why the Celtics couldn't win it all in 1985?

Harlow was represented by the firm of Cooley Manion Moore & Jones. Attorney Kevin Glynn handled the case with Pat Jones and said, "There was an incident and Harlow has retained the services of our offices."  Glynn said that no criminal complaint had been filed, but indicated that they are seeking an out-of-court settlement.

What kind of settlement?  Like the incident in Colorado that Bean settled out of court that kept the woman he raped forever-quiet?  What were the details on this?  Why do we have so many questions and so few answers?  Is it because it was the pre-internet age?

There was also a Boston attorney Dan Harrington who had been hired by an unidentified woman who was seeking damages from both Bird and Chelsea's.

"I have been retained to represent a female who was also assaulted by Larry Bird in the matter," Harrington had said. "She was a female companion of Harlow's; the incident arose out of a situation involving her."

Bird's attorney at the time Bob Woolf had said, "The reports I've heard have been totally uncharacteristic of any behavior Larry has had in the past. This is something they (Harlow's lawyers) have brought to my attention, and we're going to be looking into it. I will be speaking to them later in the week. Our options are to find out what the circumstances were and make a decision."

However later on, Woolf would confirm a report that Larry Bird agreed to an out-of-court settlement of his alleged altercation with a Quincy Market bartender.

"All I will say is that an amicable agreement has been reached and all parties are pleased with it," said Woolf, adding, "I do not want to comment any more because all parties had a confidentiality agreement."

So what else transpired?  What was this amicable agreement?  Who is the woman?  What does Quinn Buckner have to say about this?  Who the hell was Nick Harris and where is he today?  Where the hell is Mike Harlow today?  And most importantly can we thank him for blowing a chance to win the 1985 title?