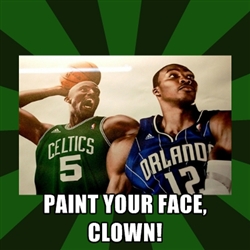 Howard gets his Showtime, but make no mistake: Howard comes without leverage in the locker room and doesn't have the latitude to revert back to his old class-clown self.

So, yes, Bryant searched out Howard's cell phone on Friday morning and made the call to Howard that the two superstars had resisted for months now. When the time comes rest assured Bryant will make something clear: The carnival act ends now. The clowning and goofing are done. During games, players used to hear Kevin Garnett screaming at Howard: "Paint your face, clown!" up and down the floor.

"That will be an interesting dynamic," one ex-teammate of Howard told Yahoo! Sports on Friday. "Not even just with Kobe. I don't think [Steve] Nash and Pau [Gasol] will enjoy that at this point in their career."

Love it. KG is one of kind.