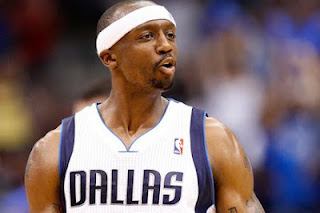 So Courtney Lee will probably start at the beginning of the year. Not like this should really come as a major shock to anybody. In a recent ESPNBoston interview, Terry makes it clear how much he loves that sixth man role.

"For me, in Dallas, it was like, they do the starters and everybody gets their name called. Well when you're the sixth man, and they check you into the game, you get your own ovation," said Terry, speaking at a high school basketball tournament held at Reebok headquarters on Thursday. "You get your own call-out. What better feeling is it than that? So, I relish in that.

"You know there's no warm-up. Every shot is pressure, everything. You don't get time to kind of feel out the game. You have to come in and be ready to play right now, and I love that challenge."

It keeps on seeming like the Celtics could not have gotten a more perfect player to fill Ray Allen's role. We all know how dissatisfied Ray Allen was with that role as the sixth man. He should've looked at things through Jason Terry's glass half full attitude.

We all know how comfortable Terry is as a role player, but how will Lee react as a starter?