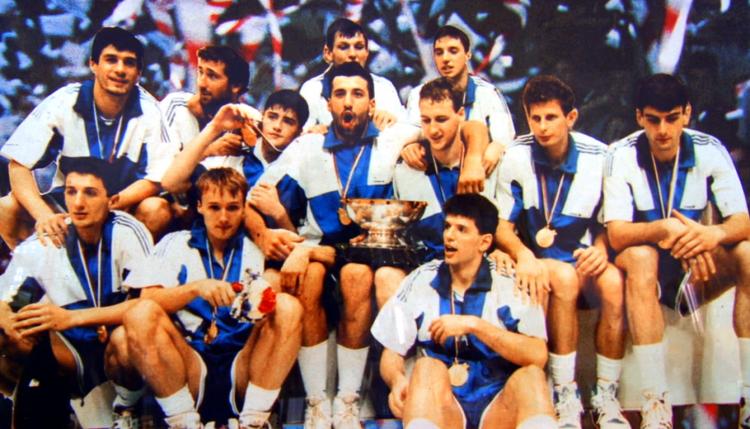 I finally had the opportunity last week to see the much heralded documentary "Once Brothers." It aired months ago on ESPN, but I'll be honest with you with the exception of Celtics games, I try to watch as little ESPN as possible. One thing that ESPN is good for is it's 30 for 30 documentaries and "Once Brothers" was tremendous. I highly recommend it. So much that I'm posting it on here (I watched it on streaming Netflix, but in case you don't have it, you can scroll down and watch it right here).

Yahoo Sports! Ball Don't Lie did a nice write-up on the film. Here's some of it:


The film's primary personal conflict — the severance of the friendship between Divac and Petrovic, the weight that Divac carries because the two never buried the hatchet before Petrovic's 1993 death, and Divac's quest for peace nearly two decades later — is masterfully drawn by writer/director Michael Tolajian, who takes full advantage of Divac's outsized persona, charisma and warmth to give viewers an emotional touchstone amid the chaos and pain.

And, of course, there is the basketball footage, all of which is sublime.

We're treated to archival clips of a thin, spry 18-year-old Divac playing in Europe, all knees and elbows as he deflects a pass out of the paint, tracks it down for the steal and goes coast-to-coast through defenders for a dunk. We see the Yugoslavian national team working opponents like speed bags, the 1988 Olympic silver medalists and 1990 world champions chaining together tic-tac-toe touch passes for open looks with such easy connectivity that Radja says he and his teammates could "play with our eyes closed."

To video of him leaping as he drives the lane, swinging the ball through his legs in mid-air and shoveling a pass to a streaking teammate for a bucket. To repeated images of him dropping bombs from two, three, even four feet behind the line. To the sight of him lighting up Hall of Fame lockdown artist Dennis Johnson during an exhibition game between the Yugoslavian national team and the Boston Celtics. (After that contest, Celtics guard Danny Ainge — who would later play with Petrovic on the Portland Trail Blazers — compared Drazen to "kind of a 'Pistol' Pete [Maravich]," before noting with a smile, "Pistol Pete is, like, my idol.")

It really is a fantastic film that again I can't recommend strongly enough. Some great rare Celtics footage in there as well.