Rondo in Paris: "I'm the best point guard in the league" 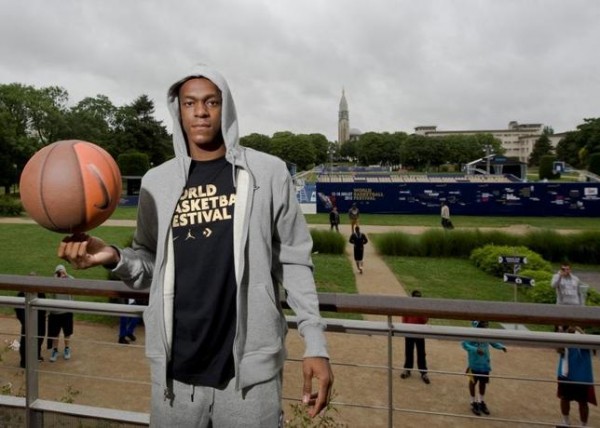 Rajon Rondo is making good use of his off season by attending the Nike World Basketball Festival in Paris. The World Baskeball Festival ran from July 12 through today, July 16. Two full-size basketball courts and two half-courts have been built at the Cité Universitaire Internationale giving fans the chance to play for free over the five days, attending tournaments and basketball clinics.

On Saturday the captain of the French basketball team Boris Diaw and his teammates stopped off to meet fans and to judge the dunk contest. The year 2012 marks the 30-year anniversary of Nike's legendary the Air Force 1 shoe, and Nike broadcast the documentary “Air Force 1: Anatomy of an Urban Legend” at the festival. 2012 is also the 20th anniversary of the 1992 USA Dream Team and Nike has developed a sportswear collection celebrating the achievements of this team, and is showcasing this line at the festival.

For his part, Rondo sat in on a question and answer session about the new Nike Hyperdunk+ shoe and is participating in other activities for Nike. He also taught youth clinics and gave an interview to a French website, BasketSession.com. You can read the entire interview in French here. I've used my best translating skills from a minor in French to give you a couple of excerpts from the interview after the jump. To whet your appetite, the title of the article is "I am the best point guard in the league."

Q: Last season, Doc Rivers said that you often took the floor during time outs. You have worked with the Big Three in Boston, but now we have the impression that you are the leader. Can we say that it is your team?

R.R.: Yes I think. My position of point guard promotes my leader status at the same time. Doc and I have been working together for 6 years now. I know what he wants, when he wants it. It is on me to pass the message on the court. Doc gives me great trust, I know what he wants without his saying it...

Q: When have you started to do that? Take his place in the time outs?

Q: This leading role, is it in your personality? Is it what you wanted?

R.R.: I did not choose that I wanted to be a leader or not. I must be one for my team. Every day, I get up telling myself I want to be better. I worked hard to get to this point and I continue to work hard.

Q: What is it that you lack you to be the perfect leader?

Q: A few months ago, Danny Ainge had fairly harsh words toward you and you almost were traded. How do you react to this?

R.R.: I realized that it was in a real business that day. You can be traded anytime anywhere. It can even happen to me right now while we are talking. It is part of the game. Trades, free agency... There is that a handful of guys who play for the same team throughout their careers. Kobe, Dirk, Paul. A few years ago it was thought that Cleveland center, Z (he thinks), Ilgauskas, thought that he would finish his career in Cleveland but he finished in Miami. It's not normal to wear the same Jersey throughout a career.

Q: You would like to play for Boston throughout your career?

R.R.: I hope so! But it is not up to me. What will happen will happen.

Q: What are your plans for this summer?

R.R.: A few glasses of wine in Paris (laughs). No seriously, I still have two weeks of vacation and I will well take advantage

Well, we can't say that our Rondo is lacking in confidence and that's a trait that you very much want your point guard to have.