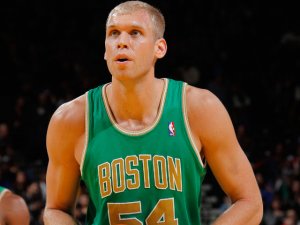 
Greg Stiemsma, who agreed to a one-year deal worth $3 million with Minnesota earlier this week, said tonight that his experience as a Celtic last season was invaluable.

That said, business was business. The Celtics weren’t prepared to offer the young center anything more than the $1 million qualifying offer they made to him last month.

“I’m not surprised. I really would have liked to come back to Boston, but business went another way,” said the Wisconsin native. “I hate to make it that simple, but I had to do what’s best for me and my family.”

I guess I was always under the assumption that the Celtics would match up to the bi-annual exception of $2.1 million to retain Greg Stiemsma. This is the first time I've read that the Celtics weren't willing to go over $1 million. Most likely if we offered the $2.l million, Stiemsma still would have left to be closer to home and make $3 million, but according to the Herald, Ainge never did, which is somewhat surprising. I think his play and potential should have earned him the $2.1 million offer. What do you think?

Click the Herald link above for some nice quotes by the Steamboat on Doc, KG, and the Celtics.