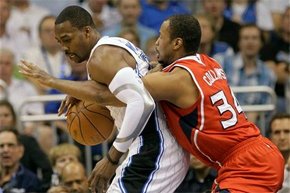 While there may be some people out there wondering who Jason Collins even is, I have been anticipating this move for a few years. Despite his age, I have seen firsthand what this man can bring on the court. However, I am more excited for what he will do for the development of our rookies.

While I'm positive that Kevin Garnett will take Fab Melo under his wing and be his full-time mentor, Jason Collins can give Melo and Jared Sullinger the knowledge that has kept him in the league this long. Collins has made a career out of getting under the skin of the dominant big men in this league. He is by no means an offensive presence, but he has irritated such bigs as Yao Ming, Shaquille O'Neal, and more recently Dwight Howard. If Jason Collins can show our young bigs Jared Sullinger and Fab Melo the little nuances that have elevated him to such an elite post defender, this signing could be worth much more than face value.