Doc says his relationship with Rondo is "terrific" 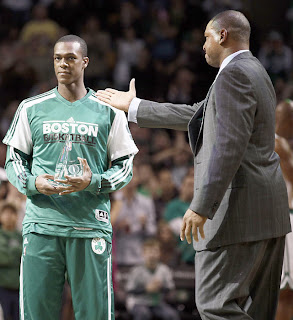 Doc was on the Dan Patrick show yesterday and was singing the praises of his star point guard Rajon Rondo. In fact he credits Rondo's growth with being a key factor in why Kevin Garnett chose to return. He also brought up a point I've been saying for a few years now whenever idiots say that Rondo is only good because he plays with the Big 3. Doc wisely mentioned that Rondo is the perfect point guard for this Celtics team.

The rest of the key guys, as great as they are, need a pass first point guard who will get them their shots exactly where they need to be taking them. There is no one better than Rondo at that. Doc wants to get the band back together. Rondo is the band leader.

View the interview after the jump as Doc discusses his "terrific" relationship with the Celtics "moody," "stubborn," "genius."