Celtics to open season against the Heat in Miami 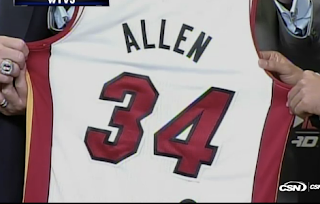 
It won't take long for Ray Allen to experience a reunion with the Boston Celtics.

While the complete NBA schedule will not be released until later this week, the Sun Sentinel has learned that the Miami Heat will open the 2012-13 NBA regular season on Tuesday Oct. 30 at AmericanAirlines Arena against the Celtics.

The Heat signed Allen away from the Celtics during the opening days of free agency earlier this month, despite a larger offer from Boston. Allen since has been criticized by some in Boston as turning his back on the Celtics to instead chase a championship with the Heat.

This was a given the second that Ray Allen chose South Beach. Would have been more intense/emotional if the game was being played in Boston, but trust me it will still be a pretty big deal in Miami.