Can E'Twaun Crack the Rotation? 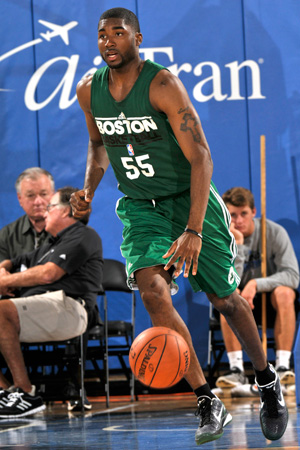 With the Celtics inability to complete a sign and trade with Dallas, it seems Courtney Lee will not be landing with the C's as Jason Terry will be using up the full Mid-Level. With Shooting Guard Avery Bradley in danger of missing some time to start the season as he recovers from 2 shoulder surgeries, the Celtics will need someone to emerge to take some minutes in a 3-guard rotation with Rondo and JET. Second year Guard E'Twaun Moore appears to have a solid chance of grabbing some regular minutes.

After appearing in 9 postseason games as a rookie (mostly garbage time), Moore has run the point for the summer league team and has looked confident and agressive. Moore had a successful college career as a scorer and seems ready to make an impact. At 6'4, he can play off the ball with Rondo in the lineup, or perhaps run the point in stretches to allow Terry to slide off the ball and focus on shot-making. Coach Rivers needs someone to step up and if Moore can build off of his summer league performance and transition into a strong training camp, there are backcourt minutes available for the taking.