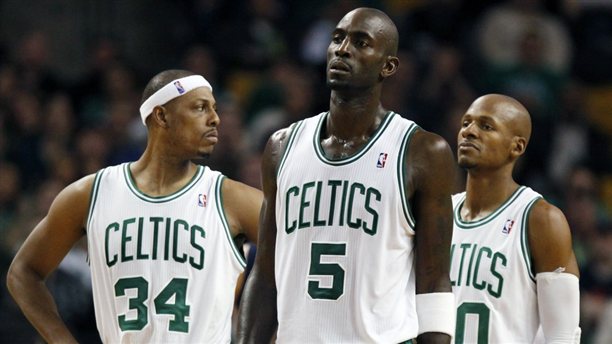 The Big Three
There is never a time in a sports fan’s life that so much emotion, confusion and wondering occur than when your team’s dynasty is moving on in a different direction.  Last night, many believe, was the last time Paul Pierce, Kevin Garnett and Ray Allen played a game together on the Celtics.  Most Celtic fans are in a panic, some were ready for the downfall and few are optimistic about the future.
Let’s say goodbye (potentially) to one of the best basketball teams this decade. They will be ranked behind the Lakers (two teams) and the Spurs.  The one item with this team was health, which cost them a second title.  A lot believe the Kendrick Perkins trade prevented multiple rings.  In 2009, Garnett went down after a historical start after winning the title.  The Celtics still managed to get to the Eastern Conference Finals.  In 2010, they make it to the NBA Finals, only to lose their center (Kendrick Perkins) to a knee injury.  They lost the last two games when Perkins got hurt.
This season was even worse than the previous years (well maybe not the Garnett injury) because the number of players that went down for Boston was historical.  The first was Jeff Green, who was sidelined before he even got started with heart surgery.  Following Green was the usual suspect, Jermaine O’Neal, who no one was complaining about getting hurt.  Next we saw Ray Allen miss plenty of games following up with Chris Wilcox having to have heart surgery as well.  Lastly, in the playoffs, the new bright star for the Celtics, Avery Bradley suffered more shoulder dislocations than a season of NFL football.  After that moment, anything else was gravy, to an objective NBA fan.

The final stats for this group (keeping in mind, if they don’t come back) will be one NBA Championship, 2 NBA Finals appearances, 3 Eastern Conference Championship appearances, and 15 All Star Game appearances by players (Pierce: 5, Garnett: 4, Allen: 3, Rondo: 3).  It was a fantastic run.  I can’t say one way or another if they should have done this or that.  I believe, as Doc said following the game seven loss in Miami, that the one wish he had was to have been healthy the whole time.  Can’t argue what they 2009 NBA Finals would have looked like with Boston healthy, instead of Orlando not giving the Lakers any issues.  Or if in 2010, Kendrick Perkins was in that fourth quarter instead of Rasheed Wallace playing nearly 40 minutes.  Not going to play this game with the Heat because the next step is the Finals against the Thunder, who I didn’t any Eastern Conference team can beat right now.  The big three era was a fantastic one, it brought back basketball to a city that has been longing the return to greatness, and for that, we thank them.
The future of the Boston Celtics
The best part about the team was the blend of young and old.  The old mentoring the young to move forward with their careers in a way they have.  The most obvious of them all is the Rajon Rondo and Kevin Garnett bond.  Every player gets the bond with Garnett as we saw him have moments with every player after the game last night.  You can bet that Greg Steimsma is very thankful for his opportunity to play along side one of the best players in our generation.  The beauty of Kevin Garnett is he wants his teammates to succeed more than he wants himself to succeed.  What Kevin brought to this team was more than what met the eye watching games on television.  Paul Pierce said it best:
"Well, he's been everything for my career," said Pierce. "Just his locker room presence, his desire, his determination, his leadership. I've said it before, when Kevin first got here, he really changed the culture of everything we did around here -- from the practice habits to on the court, just the discipline. He made everybody accountable, from the ball boys to the chefs to the guy who flew the plane.
His ability to mold Rondo into a leader has been fantastic.  This was the season where we saw that the team truly belonged to Rondo. When he went, the Celtics were near unbeatable.  That is why the future is bright with this squad.  As long as their best player, Rajon Rondo is here, they will be fun to watch.  But teams need stars and role players.  Teams need depth and good coaching to succeed.  Boston will have many of these items in place.
The only two potential pieces the Celtics will lose outside of trades will be Ray Allen (90% in my opinion) and Kevin Garnett (50% in my opinion).  The rest of the team will be intact with Rajon Rondo, Avery Bradley, Paul Pierce, Brandon Bass and potentially Jeff Green.  All of them are quality NBA starters. Although the Celtics won’t have the big three formula anymore, they will still be a very good up tempo team.  It will definitely be fun to see what Danny Ainge does with the draft (picks 21 & 22) and if he decides to move some pieces (package Bradley, Bass, Green and picks for a player).  The most interesting part will be who does Danny offer contracts to in free agency.
The future will be fun for this Celtics team.  This isn’t a sad day by any means, people move on, we go our separate ways like with Celtics players will do.  We will never be more grateful for the great times they provided to Celtic basketball and that is why today should be a happy one. 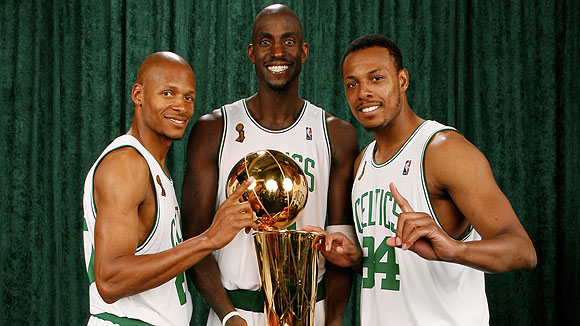