What the Hell Happened to...Doug Overton? 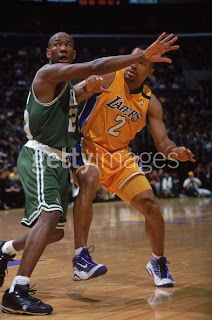 As the Celtics and Sixers continue to battle, I figured it'd only be appropriate to mention a former Sixer & Celtic in this week's episode of What the Hell Happened To, Doug Overton.

Doug played his high school ball on the very famous Dobbins Tech team in Philadelphia.  This team had future NBA player Bo Kimble, and college star Hank Gathers, who tragically died of a heart attack after leading the nation in scoring and rebounding at Loyola Marymount.  He would stay nearby and attend LaSalle where he'd team with Lionel "The L-Train" Simmons in having a standout career.


He earned All-MAAC first team honors for three consecutive years from 1988 to 1991 and helped the Explorers to three consecutive NCAA Tournament appearances, while averaging a team-high 22.3 points per game during his senior season in 1991. He is the Explorers' all-time leader in career assists (671) and steals (277) and ranks 11th on the school's career scoring list with 1,795 points.

Doug would be selected in the second round of the 1991 draft by the Sonics.  But before getting a chance to play in the NBA, Doug had to pay his dues, playing his first season with the Illawarra Hawks of the Australian Basketball League (no idea if he had contact with Todd Lichti or Connor Henry) as well as the Rockford Lightning of the CBA.  It'd definitely be too long-winded to go through his entire NBA journey, so here's a screenshot: 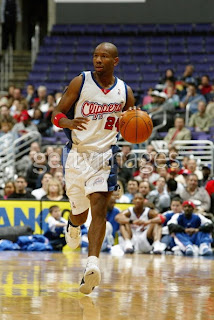 He had two stints with the Celtics and wore two different numbers, 9 and 20.  He played 48 games for the underachieving 2000 team.  And even though he shot under 40% from the field he was a staggering 20-21 from the foul line.  The following season he played 7 games for the Celtics.  This unfortunately for Doug means he gets categorized under the "Evil Emperor's Reign."

What I remember about Doug was that he was the essential backup point guard in every sense of the word.  He did nothing overly impressive but nothing overly inadequate.  Lasting as long as he did in the NBA was surely a testament to his hard work and ability to be a solid teammate.

After his NBA career ended in 2004, Doug spent time as the director of player development for the 76ers where he assisted the coaching and scouting staffs and was involved with the team's community outreach programs.  He then went on to become an assistant coach for Saint Joseph's University.

Today, just like Popeye Jones, Doug is an assistant coach with the New Jersey Nets.  And like so many of his WTHHT predecessors he has passed his athletic ability down to his son Miles.  Miles Overton is a promising high school player at St Joseph's prep.  Expect him to soon be recruited to a pretty big college, as St Joseph's, Temple, Maryland, Wake Forest & Kansas seem to be some of the bigger schools interested in him.  Maybe one day soon Celtics fans will be hoping to draft Miles.