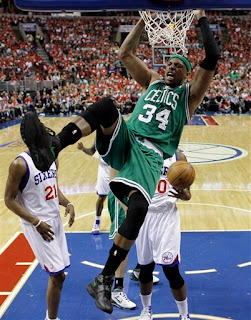 This live blog thing seems to be good luck for the Celtics. This is Bill Simmons long, but hopefully you'll read it. Reading is still cool kids.

Dick Stockton seems like a nice old man, but the guy has no business announcing bingo much less basketball. Iguadola can flat out defend. Never seen Pierce bottled up like he has been the last couple games. I like the Celtics aggression early even though they are missing shots. Bass playing well on both ends early with a dunk and a nice steal. Say what you want about the stars but it's Bass who needs to step up.

Celtics going on a nice 8-0 run into the first commercial break. Two fouls early on KG is huge. Rondo is the only one scoring right now with 13 points in the first. Pierce for two straight dunks! Where did that come from? Lou Williams three at the buzzer makes it a 7 point lead.  The first quarter showed more offense than we've seen all series. Rondo and Pierce scored the last 22 points but we still trail by 7.

KG is back on the court! 3 straight buckets to start the quarter. Pietrus hits another three. Dare I say his shot is back? Celtics playing lock down D per usual. Bass is having a good shooting game(finally). Celtics look determined this quarter. KG is 8-11 this half. Rondo finishes the half with a SICK reverse layup.Celtics outscore Philly by 18 in the second quarter and end the half with a 60-49 lead. This was by far their best quarter of the series and maybe of the postseason.

The story of the first half was the Celtics coming alive on the offensive end. Garnett and Rondo had 17 a piece. More importantly Bass hit 3-4 from the field ( though he passed up some open shots) and Pietrus hit two big threes. The Truth looked aggressive going to the hole and the Celtics defense was good overall. For Philly, Thaddeous Young had 10 points and Holiday chipped in another 10. Other than that I thought the Celtics played solid D.

First half thoughts and entertainment: Are you still reading? I hope so because I have a " Stuff my girlfriend says" teaser for you. Love this TNT crew of Barkley, Shaq, Kenny, and Ernie. Are they foolish? Of course they are but that is why it is good. I'd rather listen to Barkley than any other commentator in the game.

Conversation between my girlfriend.

Her: Who is the the Heat point guard? Lebron? Wade?
Me: Mario Chalmers
Her: Huh?

More to come this weekend. 2nd half recap after the jump. It's shorter because I got lazy.
3rd Quarter: Philly comes out cold and Celtics continue to roll. 15-2 run to start the quarter and go up 20.  Philly has traveled about4 times this period uncalled. I love that the Celtics are still playing hard even though they are up so much. Philly is finally showing their youth and looks lost out there. If we played like this every game we can beat anyone anytime. Pierce is the best player at drawing fouls in the league. It's a thing of beauty for anyone who loves basketball.

4th Quarter: Philly goes on a mini run to start and the Celtics look a bit sloppy. Why do teams always do that in sports? Probably because they are human beings.  I'd love them to get the lead extended to 25 and get the bench guys in. Pietrus another 3 ball! So what if he has 3 hours before each shot. He wasn't making those before. Sickkk alley oop from Rondo to KG. That should do it folks. Why are the starters still in up 27 points with 4 minutes left? I'm done with this live blog.

The Celtics performed like the championship caliber team they are tonight. I never had any doubts. If anything I think Game 2 was the wake up call we needed. Pierce, Rondo, and Garnett played like stars. Bass and Pietrus played well though they could still do more. Avery Bradley is still MIA on the offensive end but he'll come around. Still waiting for Ray to have a big game. Looking forward to another beatdown in Game 4. C's are back!